I have written before about walking the Camino de Santiago alone, but I didn’t specifically address the topic of being a woman and walking alone.  This topic has become news after an American woman, Denise Thiem, went missing in April of 2015.  She apparently left Astorga and was never seen again.  There are no actual sightings of her having left Astorga, and I truly hope that she turns up alive and well at some point. 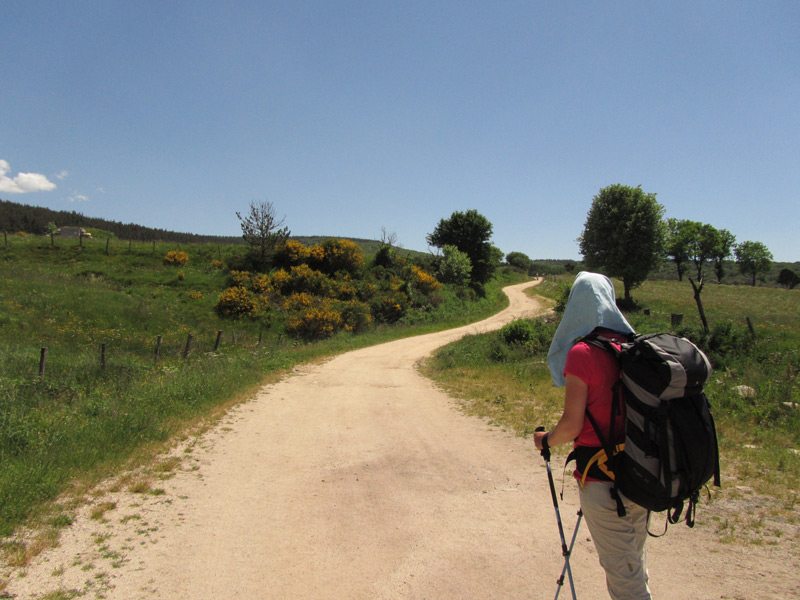 Since then it has been advised that women do not walk alone on the 24 km section from Astorga.  This area, however, is now being patrolled by Spanish mounted police to ensure the safety of pilgrims’.

“I have walked sections of the Camino alone on three different occasions. The first time was in November/December 2001 when I walked the Camino Frances. Then in 2004, I walked part of the Portuguese Route and in 2005 I walked the English Way.

As a woman walking alone, I always felt relatively safe on the path, but I took precautions just in case. I carried a walking stick and I made sure that my money belt was always tucked under the waistband of my pants. I never talked about how much money I had to anyone. One thing that gave me a sense of comfort was that I always let people know that I was walking alone. That way they would know to keep an eye out for me.

At night I always traveled with another person if I could. I talked to the people in the villages; in the churches; at the bars and in the albergues. I found that word travels fast on the Camino and the villagers, for the most part, are very concerned about the welfare of pilgrims. Once they knew that I was alone, they made other’s aware of my status and before I knew it I had people offering to feed me and care for me without any prompting.

One time I was in a small village and I was the only pilgrim in the Refugio. The hospitelera told me to be sure to lock the door at night, and she left me with the key. After I unpacked and had a shower, I went to the village bar to have something to eat. It was cold at the Refugio, so I stayed and wrote in my diary. She came in later on and told me that a strange man, who said he was a pilgrim, had arrived in the village looking for a place to sleep. She put him in the village church to avoid having him sleep in the Refugio with me, alone. I was very grateful to that woman. They say you are never alone on the Camino.”

Both times I walked the Camino I started on my own and finished with others. Walking the Camino de Santiago I believe is a very safe place to be. There are from time to time some reports of incidents, but it does appear to be very few. Considering there are more than two hundred thousand people walking the Camino each year some incidents are likely to happen.

I was one of the unfortunate ones, I had a wallet stolen from the Albergue in Pamplona, to some degree my own fault. I was naive and left my wallet in my rucksack, I did not at any time consider that on the Camino something would be stolen.

Compared to pilgrims of the past we have almost nothing to worry about. It would have been quite normal for pilgrims to have been robbed and beaten; it was definitely a more arduous journey than now. Consider, if the way does not go into a small village that is only a few kilometers off the Camino, why? Probably not too safe in times gone by.

However please remember that walking on the Camino de Santiago is safer than visiting any city in the World.

1 thought on “Women Walking Alone on the Camino de Santiago”