The tapas was excellent – so good that a restauranteur from a smart part of Bilbao was raving as much as I was as we nibbled plate after plate. I ought to know. I had tried most of the dishes which kept being passed through the hatch every few minutes. The chef behind loved playing with vegetable combinations. One minute it would be her inventive take on the classic tomato spread over toast that had me snapping up several plates and had them all laughing behind the bar; the next it’d be a superb aubergine concoction I would fail miserably to describe in words.

I loved this bar beneath the church and the couple who ran it. Don’t worry, I’m not talking through the haze of their excellent wines. Indeed, I could repeat that sentence several times and place you in many a location along El Camino, so charmed was I by the people who looked after us along the way.

Where do I start? Perhaps with the force of nature that burst forth from an ancient beamed cafe-cum-bar set within one of the private albergues. She gleamed with such enthusiasm as she served the seemingly endless stream of pilgrims who consumed her delightful food. Or maybe with the man playing his banjo as he sold trinkets he spent the winter making. Or even the wacky man with huge eyes which swivelled round to lock in on you as his mind absorbed and solved one weary pilgrim’s problems after another. 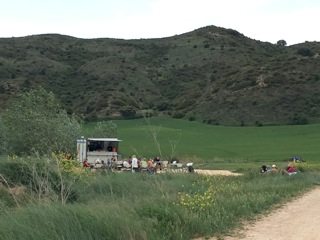 Ought I start with the loving man to whose small albergue I will donate a bit of the profit when, or if, my Camino book ever makes money? Or to the main beneficiary, the voluntary pilgrim’s advice office in St Jean which is open 364 days of the year – closing only on Christmas Day?

There are many oases at the end of a long and tiring walk, but let me mention one at the end of a path skirting a busy main road. I was so charmed by this place that I, as did many a traveler, stopped over for an extra day to help clean and cook for the next night’s walkers. You step off a dusty road, open a gate and enter a paradise of plants and flowers which give your weary body an instant lift. To your left an organic vegetable plot is being tended by a volunteer from Barcelona; a volunteer cook from London rushes out to cut what is needed for the evening meal; a dog sidles up, smiling and then saunters over to wag its tail at the volunteer from Italy who is sweeping the paths.

There are chairs laid out under beautiful trees. In a dream, you register inside what is a private house, shower and emerge in time for the yoga class. A voluble late-middle-aged man, a city banker, looks dubiously at those starting to recline upon yoga mats, but three bright young women he has met along the way grab his hands and pull him into the yoga space. 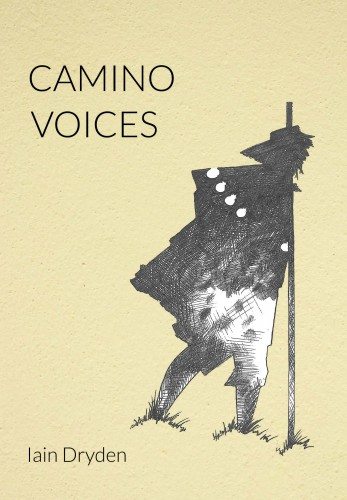 Unable to do the stretches, I jealously watch. After the session, the banker’s face has softened. I see him go up to the hostel owner and, with welling eyes, say he had dismissed yoga as a New Age thing, but this has blown his mind. The owner’s eyes well up too as they gaze at one another with mutual adoration. I saw this happen all along El Camino, indeed it happened to me several times and not only with men. And I and the women with whom I had fallen in love were not about to have an affair, for we each, each time, knew that this is the magic of El Camino. No matter how hard you are, you melt and become a child again. Time and time again.

By the end of five or six blasting weeks of such open hearted emotion set against the daily rigour and discipline of walking, you have been transformed. So how can I, a man in a rusty white van called Le Van Blanc, who requires crutches to move more than a couple hundred metres, state such things?

At dawn my wife left me yet again, veering off from a place at which we had met after days apart. For the past weeks, to amuse myself, armed with my sketchbook I had attempted to capture the way as best I could. A constant string of pilgrims, or as most preferred to be called, walkers, stopped to chat. Over 500 hundred of them. Remarkable individuals from around the world and from all walks of life. Around my sketches they would let me write, anonymously, the humorous, wise or revealing things they said and as the days unfolded, many, many people asked me to turn my sketchbooks into a book.

The process, although I was unable to “Do The Camino”, was my Camino. It transformed a sceptic into a man who spent the summer and winter of 2015 creating a book to honour those hundreds of remarkable people; consequently, I have called it ‘Camino Voices’.

See sample pages of ‘Camino Voices’ at – iaindryden.com/books and there’s a bit more at – https://www.facebook.com/caminovoices