Have you thought about it?

I know there are many pilgrims or future pilgrims out there that have had this idea.

I’ve done it and I want to share my experience with you.  All the in’s and out’s.  All the up’s and down’s.  All the pro’s and con’s.  And my strategy to raise money also.   I hope this will help those who are thinking about walking the Camino for charity, because I know there are a lot of you out there, and I know that it is worth it. 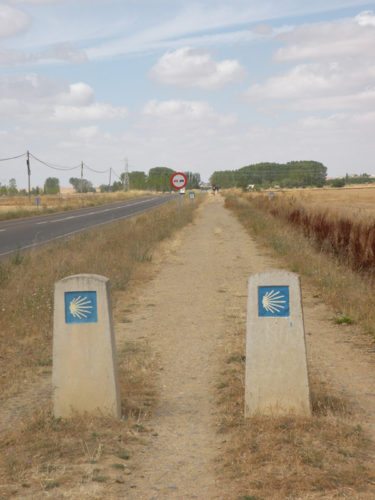 First, let me introduce myself.  My name is Chris Reynolds.  I run a website that features Charity/Adventure Travels all around the world along with inspirational videos and writings. The site is www.TheOneEffect.com.  I have been traveling the world for 3.5 years working online and making the most of this life.  I walked my first Camino (Camino Francis) in the summer 2013.  It was one of the most amazing journeys I had ever been on….and it was one of the most fun things I had ever done in such a long period of time.  I loved it so much, that before I finished, I decided that I would walk it again the following summer 2014 and raise money for a charity.

At the time I had no idea how I would put it together, or what cause I would walk for.  I thought it would be cool to build a clean water well in Africa.  I had also worked with a charity project in Peru, and thought maybe I could raise some more money for them.  Ideas crossed my mind, and after some time I decided that Africa was the place.  But, not only did I want to raise money for a charity, I wanted to go there with a group of friends and work on the project that we raised money for.

I began searching online.  I was really set on finding a clean water well to build for a village.  I called, emailed and chatted with dozens of charities.  All of them seemed like great causes but very few would host us. I found a group working in the Central African Republic.  They told me that we could build a water-well there for about $15,000 USD and we could stay with them while we built it.  There was one downside….the country had just erupted in civil war and it was not safe at all……scratch that idea…..back to searching.

Two days before Christmas 2013 I received an email.  I was busy with family and shopping so I decided not to open it.  But remembering back, I had a special feeling about this email.  Internally, I knew that was the one.  I finally opened the email a day or so after Christmas. It was from Amanda Christman Larson. She was and still is the founder of CompassionateJourneys.com.  In the email that I had sent her, I told her we needed a charity that would host us while we did the fundraising and the work.  From her email, she said this idea would work perfectly with what she was working on.  Amanda had a dream.  She had been working with the village of Tafi Atome, Ghana. She was building a stronger educational system, and establishing the charity as an active part of the community.  Her big goal was to build a home where former slave children could live.  She would then adopt the children out of slavery and keep them there with a local family to watch over them.

The time and work to get the project set up was a lot.  But, that didn’t bother me.  Work is just work and I liked what I was doing.  I could be watching more television in my free time, or I could be making a real difference in the world.  I hope to inspire some of you choose the latter. Maybe it is important to note, that I was working a full-time job at the time and running a blog.  So 60,70,80 hours a week are no strangers to me.  Sixteen hour days on the computer…..bring it.  Again, I was doing work that inspired me and made me feel alive.  Not work that made me want to throw the computer across the room.

One of my favorite quotes is by Howard Thurman

That is what was happening.  My first Camino had awoken a beast from within.  A beast that would change the world for these children……and I wasn’t backing down from anything.

Even my work….they denied me the time off to walk the Camino the second time.  I refused to take no for an answer. This was going to happen no matter what.  So, I went into negotiations with my work for 5 weeks. I spoke with all the important executives and managers at the company.  I pulled up previous contracts to prove my point that I had earned the time off.  I spent hours upon hours arguing my case and guess what….I won.  The company ended up completely re-writing a new contract based on my arguments.  It helped that others working with the company agreed, but I was to the point where I truly considered quitting my job to make this happen.

Note:  This isn’t a requirement for anyone to build a charity/fundraiser. However, this is how it played out for me. The most important aspect of completing this project was the intention.

So work gave me the time off.  I began making videos to promote the project. No, I am no expert at making videos, I just threw things together from iMovie09. I put up a fundraising page on Indiegogo, (https://www.indiegogo.com/projects/complete-the-construction-of-a-home-for-9-slave-children-in-ghana)to collect the money.  I started asking friends to come along on the Camino and to Ghana.  I had a woman who joined up with the cause.  She told me she was going to help and raise $50,000 USD. She told me we were going to get free flights to Ghana.  She claimed that she was a player and she was going to make things happen.  I worked with her for 3 months.  I was super excited.  Then in April, (one month before the start of the Camino) she went MIA.  She didn’t return my text’s or calls.  Finally, 2 weeks later she sent me a text saying that she had a bad feeling and decided not to work with us.  “Nice” I thought to myself.  Three months of false hopes and BS coming from her, only to flake out over a text a few weeks before the trip. She couldn’t even give me a phone call.  It was humiliating telling the charity founder that I could not deliver on her broken promises.  Humbling and humiliating.  But, the universe is bountiful and weeds people out of your life for very good reasons. I am grateful for that.

Finally, in May of 2014, myself and 2 others set out for St. Jean Pied-de-Port, France.  We were excited off our rockers.  I remember meeting there the first day and the energy we had between us. I was there walking the Camino for the second time. I felt like the luckiest guy in the world.  The other 2 were there for the first time and stoked about the next 5 weeks of their lives.  There is nothing like the freedom on the Camino.  Nothing to do, no where to go. Just you, and your backpack….and a few other pilgrims from around the world.

I decided 9 months prior to wear a shirt that had a grand statement on it.  It said ‘because I said I would’.  Bold and the exact way I choose to live my life. 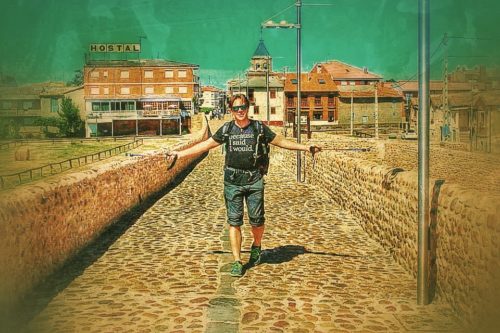 As we began walking, as pilgrims do, we got into deep conversations.  People would tell me why they were there, I would tell them why I was there.  Many people were inspired and wanted to help.  Every few days we would send updates on Facebook, emails and other social media sources about our trip and the total amount raised to that point.  We would make videos of us in France and northern Spain next to historic cathedrals and important points along the Camino.  Photos were added to Facebook 3-4 times a week.  Many days I sat working during the mornings to update people about the fundraiser.  The evenings I would walk until nearly dark to catch up with my Camino Friends. We received messages and donations from friends, family, and past pilgrims that I hadn’t heard from in ages. The magic of the Camino was working and it was all going to make such a massive difference for these children in Ghana.

I was lucky enough to celebrate my birthday on the Camino and I thought to myself how fortunate I was.  If I had never started chasing this dream…where would I be?  Who would miss out on chasing their dreams because I was too afraid to chase mine?  If anything, I hope this story serves as an inspiration that no matter who you are, or where you come from that our dreams are our purpose in life.  If we neglect them, life will neglect us. If we follow them with courage…even follow them with fear….then we will steadily watch our lives change and the lives of others change as well.  They are important, just as important as food.

Coming into Santiago de Compostela was such a highlight.  During the pilgrims mass I had tears running down my face.  It was without a doubt one of the most special times of my life. When the fundraiser ended we had raised $11,200.  Our group traveled to Ghana in Aug. 2014 and had a wonderful time living with the locals for 2 weeks and constructing the home.  The home is scheduled to be finished by Dec. 2014.  Sometime in early 2015 the children will be released from slavery and given a proper home with a proper education.  Life will never look the same again for these kids and it is all because myself and a few others had a dream and the courage to pursue it.

Will you get a bunch of support along the Camino?  I would say most definitely “Yes”.

Is it worth it?  Without a doubt!

Because I said I would,

Founder of The One Effect -Experiments to Change the World

P.S.  If you have any questions about fundraising while on the Camino feel free to leave a comment at http://theoneeffect.com/contact/ I will answer anything you have ASAP.