How a stranger helped me get emergency surgery mid-Camino.  By: Chloe Rose Stuart-Ulin

I was three weeks into my Camino from Le Puy when I first considered giving up. On a cobbled road outside an organic snack shop in rural France, I pulled out a rickety iron chair set out for patrons and started taking off my shoes. Slowly, slowly, using both hands, I lifted them off my feet and peeled off my socks. I hadn’t fully understood the severity of my predicament until my feet were out of my shoes, which were far too tight and damp. Immediately my toes swelled, crushing and rejecting my toenails, which had died earlier that week but had yet to fall off. This caused blisters to form under my two big toenails, an obvious problem that my tough pilgrim-attitude had allowed me to ignore. 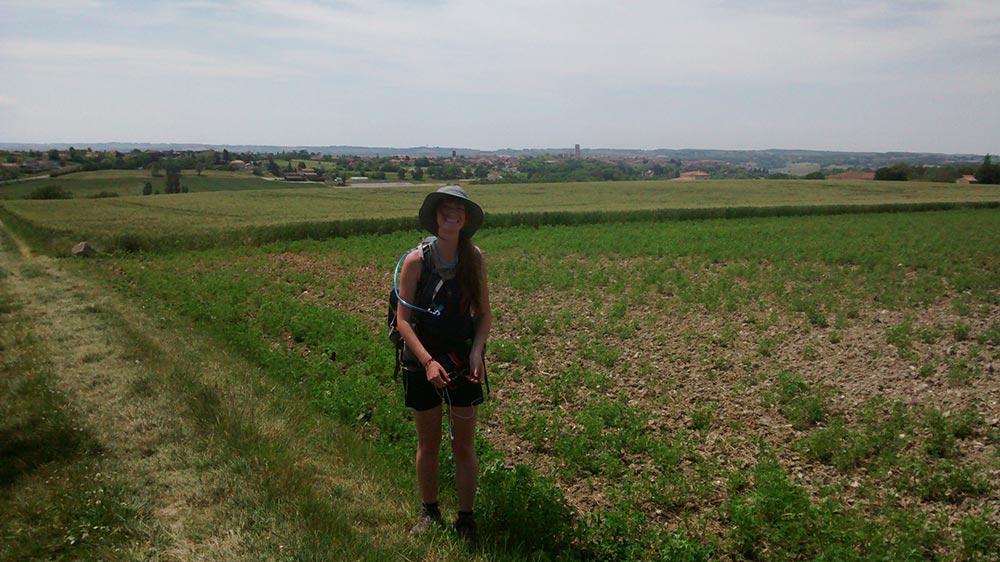 As the circulation returned to my toes so did the pain, and I knew then that I would never be able to put those shoes on again. I told my three traveling companions to continue on without me. It was time to stop walking.

The woman running the organic snack shop, (I would later learn her name: Edwidge) came outside to study my feet. She’d only been running the store for a little while but had already seen her fair share of pilgrims. Edwidge bent down over my feet, adjusting her thick glasses, but otherwise keeping her hands clear. A minute later she was on the phone with a neighbor, asking them to look after her store while she drove me to the hospital.

Luckily for me, the next stop along the Camino was Aire-sur-l’Adour, a city big enough to have a hospital with operating rooms and 24/7 staff. My high-school French was good enough to make polite conversation with Edwidge; I knew how to say blisters (cloques) and pain (douleur), but that was about the extent of my medical vocabulary and it was clear I would need help speaking with doctors. Edwidge offered to stay with me and translate.

In the emergency triage area, a bored receptionist took down my name and handed over the necessary paperwork, which we filled out in the deserted waiting area. A half hour later I was led further inside for an x-ray of my toes, and a specialist was called in to have a closer look. He made eye-contact during our introductory hand-shake but spent the rest of the exam addressing the nurse and poking my toes.

«On a peut-être besoin d’enlever les deux gros orteils,» he mumbled to the nurse, as though hoping I wouldn’t hear, «si l’infection est dans l’os.»

I understood enough to know what he’d told her. If the infection had already spread to my bones, they would have to remove my big toes.

They continued to deliberate on my condition until finally, the specialist looked at me again. “No more walking,” he said in English. “Done.”

After he’d left, the nurse explained my situation more slowly. They would schedule the OR for surgery to remove the toenails and clean out the infection. They wanted to put me under general anesthesia instead of just a local anesthetic; if the toes needed to come off, they would rather I be unconscious already. I signed off, not sure what else to do.

Edwidge drove me to a hostel in Aire-sur-l’Adour, Hotel de la Paix, where I spent seven days waiting for the surgery and ten days after that recovering. She continued to visit, bringing me treats from her store and helping me buy supplies from the pharmacy. I didn’t even try to put my hiking shoes back on, leaving them out to taunt me while I hobbled around in sandals. 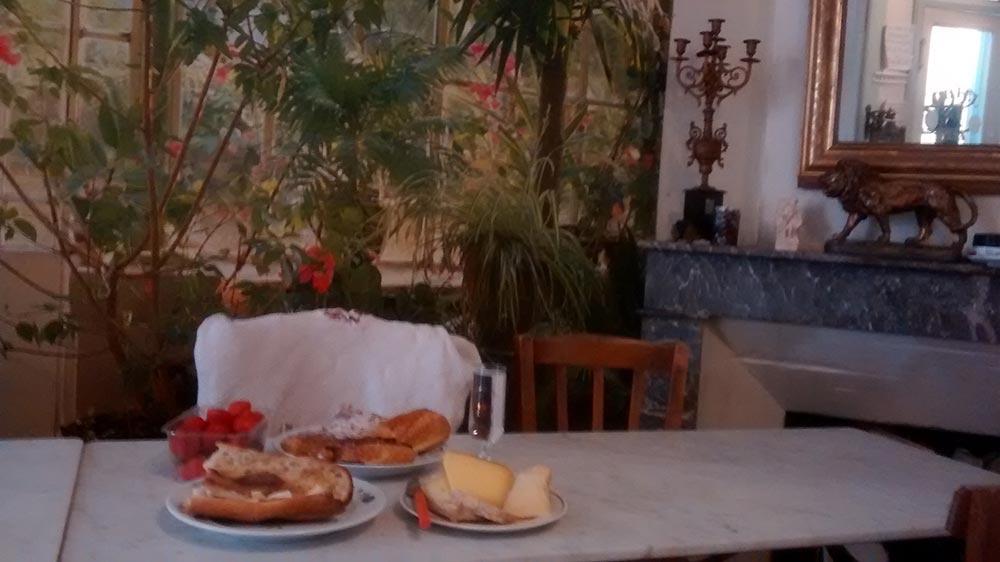 The surgery was scheduled for the day before my twenty-fourth birthday. Edwidge took me out for lunch and gave me a beautiful infinity bracelet, which I still wear. She drove me to the hospital the next day and stayed with me for as long as she was allowed.

Two doctors wheeled me into the operating room, where a shiny steel table was waiting for me in the center. They pushed my bed up against the metal and hesitated, so I seized this last shred of agency to leap from my bed to the cold table on my own, navy-blue napkin gown fluttering indiscreetly. The doctors smiled and laughed at my eagerness, but I still felt a burbling panic threatening to overflow into horrified crying. They stood around making small talk, idly waiting for me to pass out so they could get on with the task at hand. I felt like a flustered hostess failing to entertain some early arrivals at an intimate dinner party.

Then I passed out.

When I announced to my family that I would be walking 900 miles from Le Puy-en-Velay in France to Santiago in Spain, on a pilgrimage that would last two-and-a-half months, they were relieved. I was the last one in my family to travel alone; my parents having started right out of university and my older sister even earlier at just 18. I used school and a lack of money as my excuses for lagging behind when it was really a matter of overcoming my anxieties about becoming a self-sufficient adult.

Part of my pilgrim-prep included buying hiking boots, which I purchased online from Merrell. I’d read on some Camino forums that you should always get boots at least one half-size up from your regular shoes, but they didn’t have any 8.5 size in stock. I didn’t want to put off any part of my preparations, so I bought my normal size 8s. “My feet have never swelled that much,” I reasoned, immaturely, thinking of my long walks with the dog and around campus. When they arrived a few weeks later I walked in them every day for two months, never bothering to use them on actual hikes.

I woke up in stages after the surgery, my eyelids resisting like fridge magnets pulling together. Hidden under a mountain of gauze, I wiggled my toes and confirmed that all ten were still intact. Nurses came in to give me food, which was delicious (I was in France, after all) and drugs. My doctor dropped by at one point to tell me everything went well. Edwidge came in to give me a good book and some granola.

I would spend another week and a half recovering in Aire-sur-l’Adour, improving my French and transcribing some of my handwritten notes. There was never any doubt in my mind that I would continue walking to Santiago, to the dismay of my parents and friends. After three days I was sleeping in as late as 8am, which for pilgrims might as well be the afternoon. I felt an acute sense of guilt whenever a young group of hikers stayed the night, only to be off again long before I woke up the next morning.

Once satisfactorily recovered, I stuffed my bag full of surgical supplies (to clean my stitches every other day) and Edwidge drove me to Saint-Jean-Pied-du-Port, the last stage of the Le Puy route and the first on the Camino Frances. Along the way we stopped at a retail sports store, where Edwidge made me try on at least ten different types of hiking boots before we finally settled on a pair, size 9, with no waterproofing. We reasoned that wet feet on rainy days was better than damp, blister-prone feet on hot days. 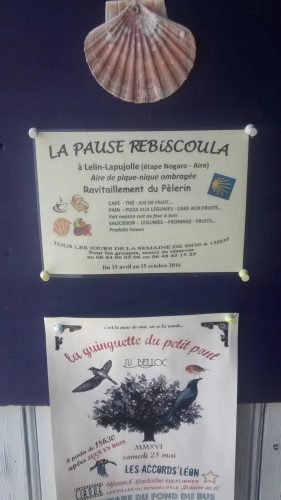 A note on shoes: Waterproofing will keep moisture from getting inside, but it will also keep moisture from escaping. If you have sweaty feet like me, your toes will be pruning by the end of the day and the loosened skin will blister more easily as your toes rub together.

At checkout, Edwidge winked and smiled and paid for the whole thing. I’ve never met anyone so wholefully generous. Anyone walking the Le Puy route between Nogaro and Aire-sur-l’Adour should take a moment to visit La Pause Rebiscoula, Edwidge’s organic snack store on GR65.

I waded back into the Camino culture in Saint Jean, energized by the joy and nerves of hikers preparing for their first day. I was cast immediately as the veteran pilgrim with The Toes, and it wasn’t long before pilgrims I’d never met started recognizing my hobble. Every other day I would take out my surgical supplies to clean and test my stitches, usually drawing a few onlookers. Sometimes another pilgrim would whip out their own damaged feet and present them to me for advice and care. I did my best to help them, ultimately setting up a website once I got back to Canada with all I’d learned.

I’m happy to say I made it to Santiago in one piece, though I cheated several stages when my stitches started tearing. With the help and encouragement of my new Pilgrim Family, I stayed and learned to work around these physical limitations; that there’s more than one way to do the Camino.

I grumbled a lot about the cost of travel insurance before I left, which for a two-month trip to Europe set me back CAD$270. At the time it seemed like a ridiculous amount of money, almost half the price of my round-trip tickets. Looking back, I can’t stress enough the importance of getting proper insurance. When I added up all the medical costs I incurred during my Camino, including everything from blister pads to the surgery in France, it came to €1380 (Almost CAD$2000). My insurance covered the entire amount, reimbursing me within a month of my return to Canada.

The Camino is cheap and friendly. It’s a path that leads in a straight line, with interesting and beautiful stops along the way. If ever there was a trip built for the anxious traveler, it would be the pilgrimage routes to Santiago. My advice: buy the right shoes, buy the right insurance, and never underestimate the kindness of strangers.

For more information and advice on the Le Puy route to Santiago, visit my website. 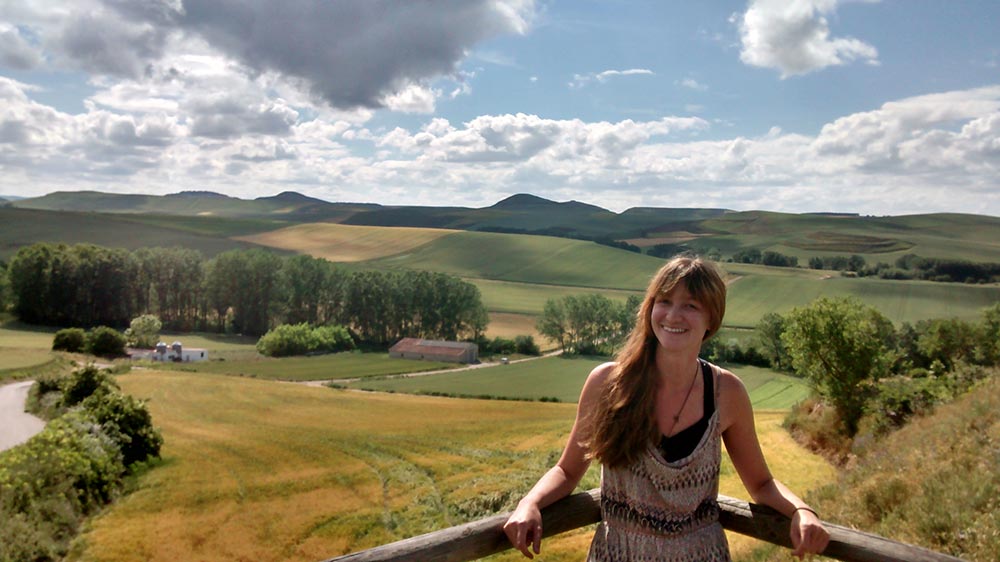