“Some people walk in the rain, others just get wet.” Roger Miller

11th August 2017 – The title of this blog post came about as one of us, whom shall remain nameless, wore ill-fitting shorts which became very uncomfortable as the kilometers clocked up.  Today the only comfort gained would be from wearing a skirt and going commando. So for any ladies reading this a walking skirt could be a useful addition to your Camino attire.  Your dignity will be kept intact while your nether regions can breathe.  However, just be careful the skirt is of a decent length, as you don’t want to be arrested for flashing. 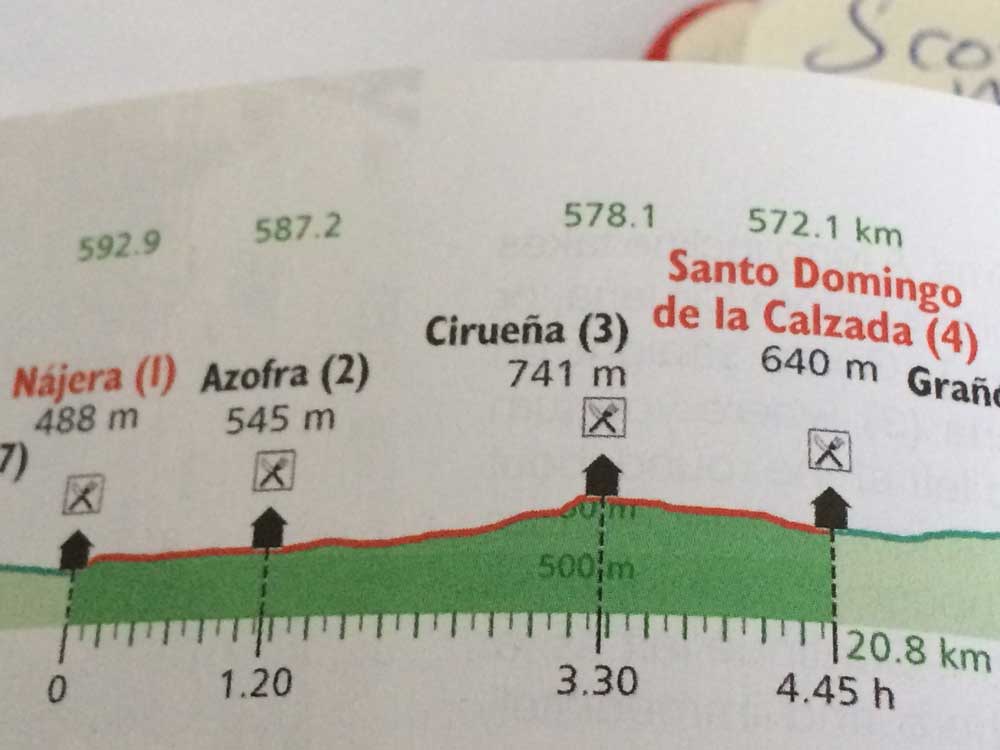 This will give you some idea of the gradient we had to walk today.  (Route map taken from Rother Walking Guide – Camino de Santiago.)

We left Najera earlier than usual at 8 am, as the infamous heatwave we had heard about was apparently going to arrive. We had a long walk of 22 km ahead of us and we hoped to have a head start on the sun.  However, if we were really serious, we should have left with the other pilgrims at 5.30 am.  But, honestly, I could think of nothing worse!  Luckily for me, the rest of my group were of the same mindset. 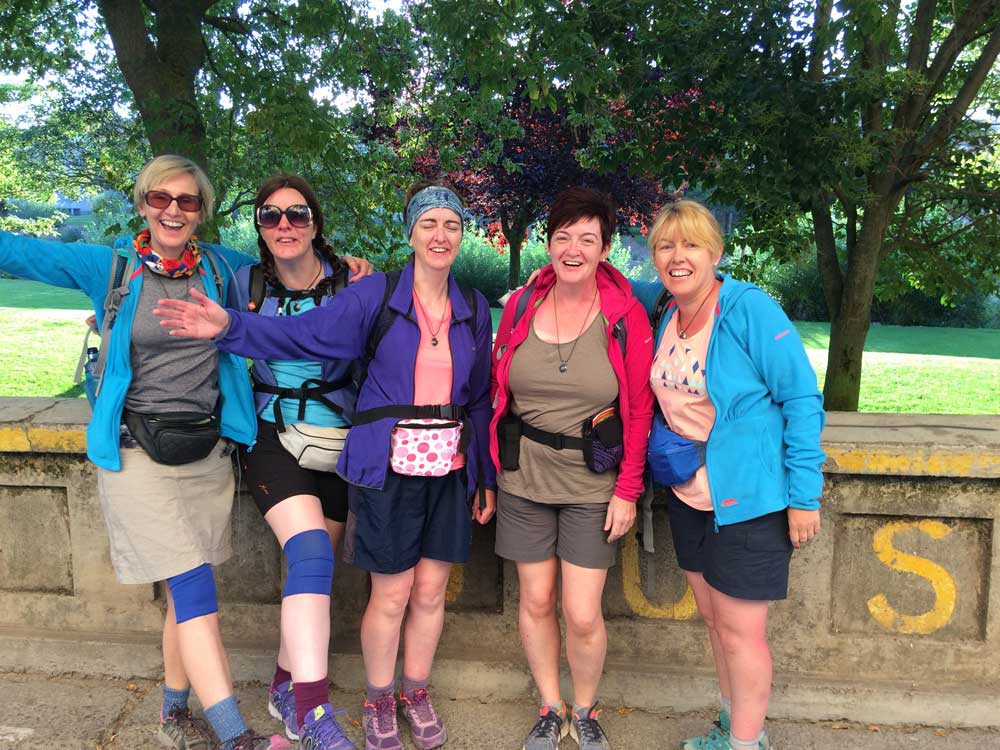 Thankfully the route was much easier today and the temperature was in and around 23 degrees – so we weren’t baked in the sunshine. This part of our walk was much more picturesque than the previous few days.  We walked mostly on broad farm tracks as an expansive vista of wide golden fields replaced the vineyards we had become accustomed to seeing on previous days.  The route was well marked but there was no shade and we had long stretches to walk between villages.  Sun cream, a hat and plenty of water was an absolute must. 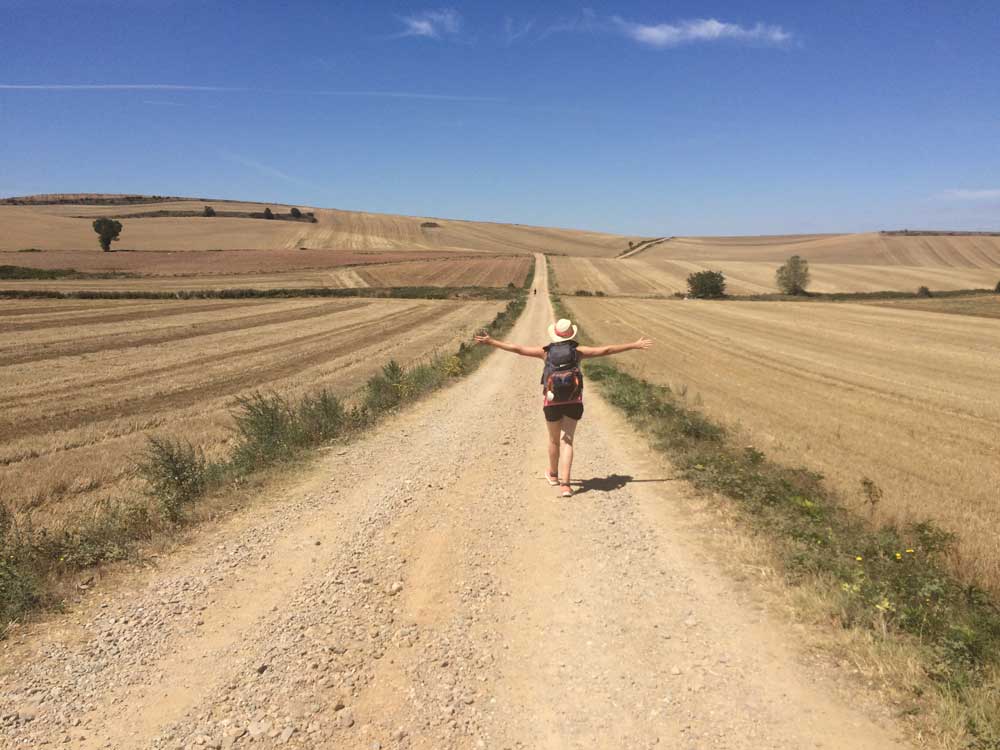 We stopped in the tiny town of Azofra, about 10 km from Najera, for a coffee and croissant.  These little food and drink stops are what makes the walk so much more enjoyable.  Yes, we could be at our destination in much quicker time, if we charged on like Usain Bolt, but where’s the fun in that? And who am I kidding comparing us to Bolt?  Grannies on zimmer frames might be a more accurate comparison.

The Camino is a marathon, not a race and we want to enjoy every minute.  As a group, we all walk more or less at the same pace and if anyone wants to walk ahead we arrange to meet at the next stop.  Sharon was having terrible problems with blisters and a very swollen ankle so we wanted to support her and walked at a pace which was comfortable for her.  Let’s face it, there’s nothing comfortable about blisters, but moral support helps ease the pain a little…..as well as compeed! 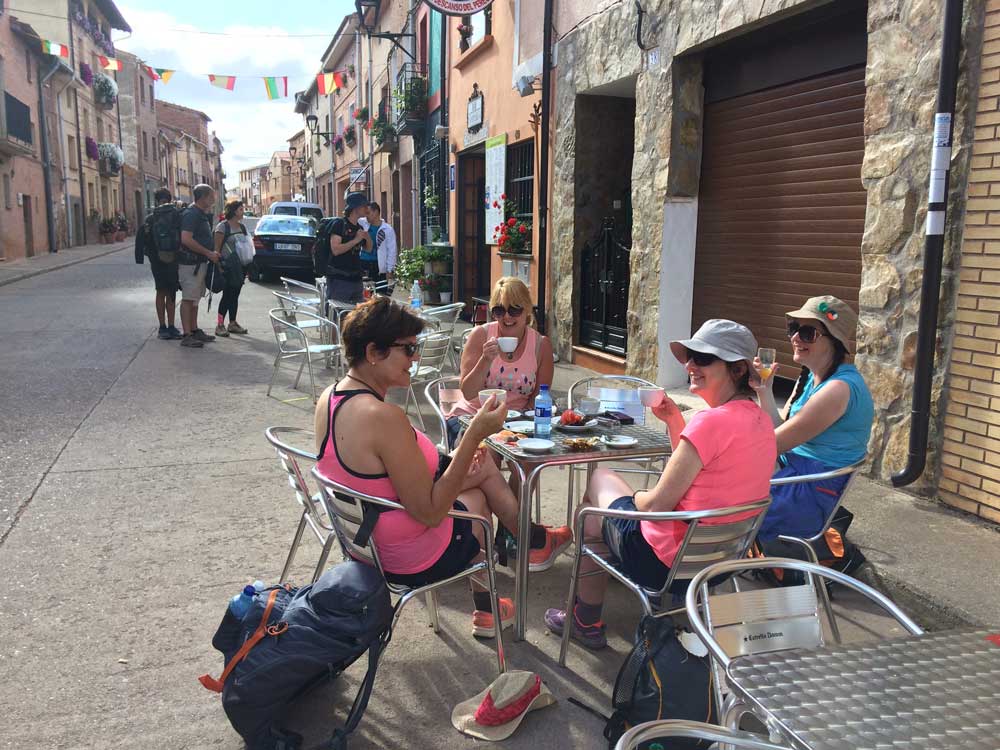 We stopped again just before Ciruena at a food truck set up beside a picnic area.  The guy was selling little trinkets, snacks, and drinks.  And all he wanted was a donation.  The irony about donations – you are so surprised by someone not putting a price on something that invariably you end up giving more.  Kindness begets kindness.  Or maybe he’s just shrewd.

We skirted around the perimeter of the local golf club before entering the village. I didn’t like the modern housing development in Ciruena, as I felt it jarred with the picturesque landscape.   We found it quite eerie that there was very little sign of life in the village; a veritable ghost town.  Apparently, it has a population of 131 people, but we didn’t see one person. 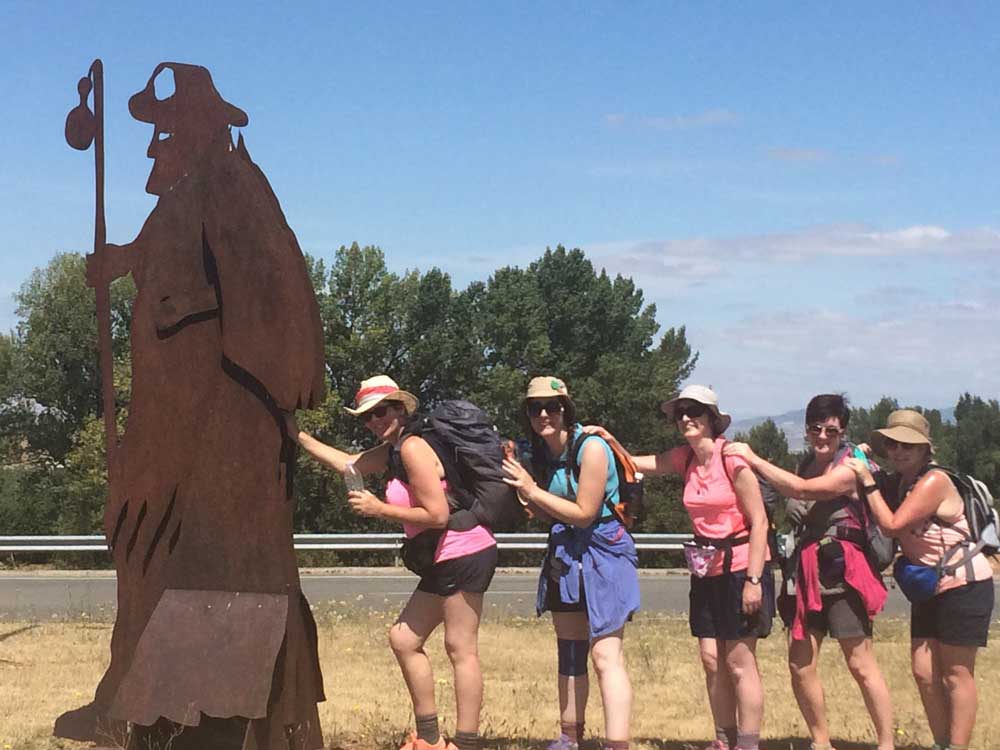 It took us over an hour to walk the 8 km from Ciruena to Santo Domingo and our final destination for today. We were staying in Cofradia del Santo Monastery for the princely sum of 7 euro for the night.  It has the honor of being the oldest hostel on the Camino Way.  I would recommend this hostel as it was clean, comfortable, secure and the staff were very welcoming.  You can also get your pilgrim passport signed here.  It can accommodate up to 220 people, thankfully not all together – we had 8 bunk beds in our room.   And par for the course on the Camino, we were woken around 5.30 am by the sound of pilgrims who choose to start walking early! 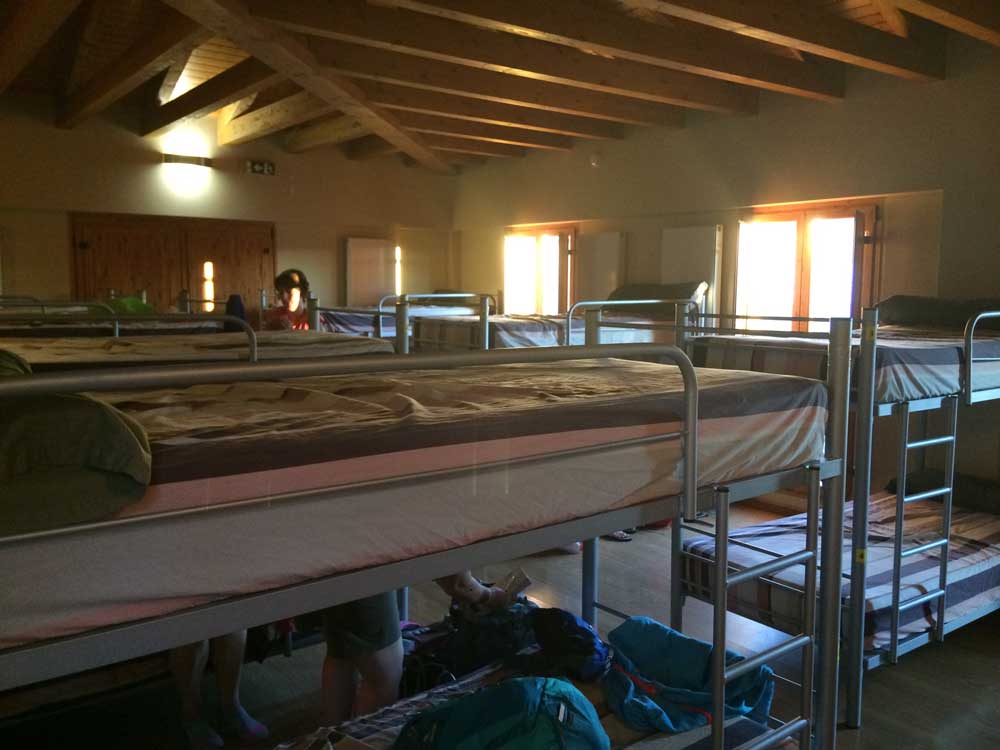 In my walking guide, it estimates a walking time of approximately 5 hours to get from Najera to Santo Domingo – it took us 7 hours!  My guide doesn’t take into account all our food and drink stops! We arrived in Santo Domingo about 3pm which gave us plenty of time to relax and wander around the town and find out a little bit more about the place.

Santo Domingo de la Calzada – one of the most prominent stopping places on the Camino founded by Domingo de Viloria (1019-1109), a hermit who devoted his life to the pilgrim way.  He founded a hostel and a hospice and looked after sick pilgrims.  Shortly after his death Domingo was canonized and recognized as a saint.  From 1930 he has been the patron saint of the Spanish road and bridge builders.

The beautiful Romanesque-Gothic cathedral in the town was built between 1158 and 1235 and well worth a visit.  It also holds the tomb of Santo Domingo.

A pair of white chickens kept in the church represents one of the most popular legends of the Camino. (Unfortunately, I have no photographs of the chickens.)

The Legend of the White Chickens 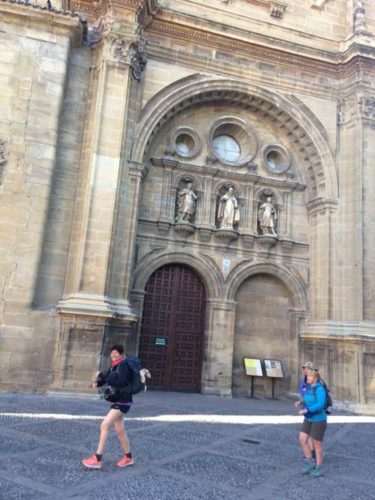 An inn keeper’s daughter fell in love with a young pilgrim when he made a stop at Santo Domingo.  He spurned her love, but hell hath no fury like a woman scorned, and in revenge, she falsely accused him of robbery.  The young pilgrim ended up on the gallows. The story goes that his parents found him hanging from the rope, but still alive standing on the shoulders of Santo Domingo.  When they reported this to the judge who was having dinner at the time, he told them, “your son is as dead as the roast chickens on my plate.”  But while he was speaking the birds rose up with a loud crow.  This gave rise to the famous saying, “Santo Domingo de la Calzada where the chickens sang after being roasted.”  To this day the chickens are replaced every 21 days in memory of the legend.

We bumped into Scott from Scotland.  What are the bets this wasn’t his real name?  We had a beer with him before dinner.  As with most conversations on the Camino, the talk turned to the topic of blisters.  Who has them? Who hasn’t? How compeed was the savior of feet in every pilgrim’s first aid kit.  In between talk of blisters, Scott told us he was a researcher for ITV, but sure, he could tell us anything, we are never going to see him again.  Fair play to him though, he was walking the entire route and hoped to finish it in 20 days.    He was walking long distances of 50 km a day and had a tent with him, so when he felt tired, he would just stop and put up camp for the night.  Real freedom, obeying no one else’s clock, but his own.

We decided to let our hair down tonight and have a drink or two.  The craic was mighty.  We eventually went to bed after receiving a couple of friendly reminders/warnings about keeping the noise level down.

I tell you we weren’t so fresh the next morning – we still hadn’t organized our accommodation for that night and had no idea where to send our bags to.  (Of course, if you are carrying your own bag, you don’t have to worry about this.)  But that’s half the fun of the Camino and it always works out….well nearly always.