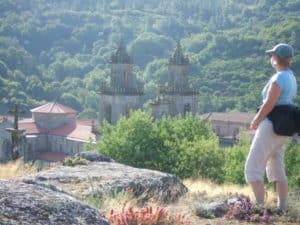 Many are aware that the Camino de Santiago is an ancient Christian pilgrims route with Santiago de Compostela as its final destination.  What most folk don’t realise until they’ve been and walked the Way, is that it’s only one of many pilgrimage route to Santiago.

Each Camino de Santiago has its own name; thus the most popular route which enters from the SW of France is known as the Camino Francès.

The Ruta or Via de la Plata approaches from the south of Spain and has an interesting history pre-dating the Camino phenomena.  Already before the Romans made the Iberian peninsula one of their wealthiest outposts, the celti-iberians had been moving their herds of cattle and flocks of sheep to the cooler northern pastures escaping the blistering summer heat, and south to escape the harsh winters.

Roman occupation brought its now famed road technology, and many of the stout circular original mile stone markers as well as some stretches of flat paving stones are amazingly still in place!  There is a real buzz to be had not only from walking in the same footsteps as thousands of pilgrims, but also on the very flagstones that were laid some two centuries ago.

It should be mentioned here that even though the Via de la Plata is longer than the Camino Francès, it is much less frequented.  This would seem to be down to the fact that it draws on a mainly Spanish populace whereas the Camino Francès acts as a funnel for folk from all over western Europe.

The ‘Plata’ in the title means ‘silver’ in castillian Spanish.  As the route passes through the province of Extremadura, historical home to most of Spain’s plundering Conquistadores who of course brought back untold fortunes from the New World, this would seem a plausible origin to the name.  However the real provenance is said to be a derivation from the arabic ‘Ba-latta’ meaning ‘wide way’.*  It was down this route that Almanzor returned bearing away the sacked bells from Santiago’s cathedral to be hung upside in the great mosque of Cordoba and used to store olive oil.

The Ruta Plata passes from Seville province into that of Extremadura.  The provenance of this area’s name certainly does come from the fact that its weather makes it ‘extremely hard’ to live in.  Harsh winters and even harsher summers would seem to sum it up in a nutshell.  That said, the Romans made the city of Merida a veritable metropolis.  It has some the finest ancient remains, with its theatre and bridge amongst the finest Roman architecture to be seen.

The prevailing weather pattern here does make the Via de la Plata a challenging route.  More so as there is a limited accommodation listing.  Not surprising that many walkers wanting a taste of this Camino choose to hike the final section as it leaves Extremadura and enters the greener Galicia.

Straight off you’ll notice that you don’t understand much of the local language.  Gallego is closer to Portugues than Castillian, with much ‘shusshing’ and ‘esshing’.  Many of the country folk will try to answer questions in spanish, but invariably a sentence is a hybrid of the two tongues. 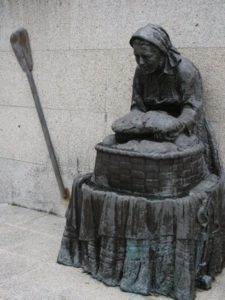 Amongst the highlights of the Galician section of the Ruta de la Plata must be the old town of Ourense and its hot water springs.  The walk out from the city by the stupendous Roman based medieval bridge that spans the vine strewn banks of the Rio Miño is dizzy affair.  After that it is a constant love affair with the Oak tree.  This would explain why the fine local Ribeiro wines always entered the southern gateway into Santiago in the finest oaken barrels.

The steep climb out of the Miño, is really the only prolonged slope of note for this final section.  The village of Cea is famed for it’s huge loaves of bread which stay fresh for several days.  They certainly provide sustenance all the way to the gates of the nearby Cistercian monastery of Oseira.  The 12th century church houses the unique statuette of the Virgin of the Milk.  The rest of the monastery was abandoned and plundered due to the dissolution in 1830, and lay in a ruinous state for over 100 years.  It is still slowly being rebuilt.

The valleys surrounding Oseria are amongst some of the prettiest in Galicia.  Hamlets and small village conserve a way of life that has existed for centuries.  Small tracts of enclosed pasture and vegetable plots are still actively worked.  Autumn is arguably the best time to traverse this area, as crops are being harvested and fruits are freely available.  Country folk still harvest maize cobs by hand before storing them in the horreos, grain stores on rat proof stilts. 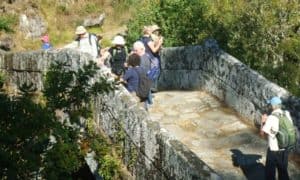 The Way soon passes the emblematic Pico Sacro, a steep sided conical hill with links to the Santiago story.  St. James’s followers are said to have tamed wild bulls and in turn converted the Wolf Queen on the same slopes.  The short detour to the top is well worth it as the surrounding views are stunning.  Ahead, Santiago’s spires can be seen for the first time, some 15 kms away, as well as all the towns that have already been visited back along the way. 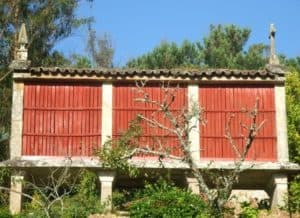 After some 100kms, the approach to Santiago is also the finest of all the Caminos.  No prolonged agony of endless modern pavements crossing motorways, modern industrial units and residential districts.   A cobbled approach along a couple of streets, and suddenly you are passing ancient churches, little shops and spit and sawdust bars, before passing through one of the few medieval archways into Santiago itself.  This is much as the Camino of old!

Once you’ve walked the busy Camino Francès it comes as a refreshing change to walk through Spain’s countryside and meet only the local folk.  There surely comes a point when with so many strangers converging on one route, the native backdrop and its people can become just that, a background. One statistic: September 2010, walking Ourense to Santiago in ten days – 2 cyclists and 6 walkers encountered.  Another sobering fact is that of all the rural Gallegos encountered, the majority are over 65 years old.  The tending of the galician countryside is a dying art!

Callum Christie of WalkTheCamino.com organise self guided and guided tours by Callum Christie along the last 100kms of the Ruta de la Plata from Ourense to Santiago. More details at www.walkthecamino.com