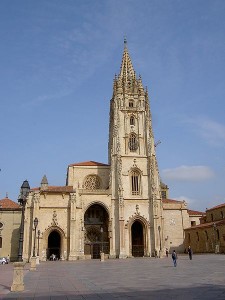 This section wasn’t strictly the Compostela/ Camino. One of our hosts who only allowed you to stay if you carried your pack the whole way told us it would be fine to do this by train, but while we intended to take it a bit easier we walked.

The weather was extraordinary. An early summer had hit the region. No snow and brilliant blue skies and 28 C (75 F). In Biddarray on the first night, we went to Hotel Ostape (amazing. We did take the golf cart down the drive) and I even went swimming. Lush green pasture, rugged mountains and people that seemed to think we should speak Basque. Certainly, if you strayed a meter over the border they no longer spoke French and we hadn’t got our Spanish phrase book yet.

The first glimpse of the sea was breathtaking. We had walked from central France to the sea. It seemed unbelievable. A short boat trip and we were into Spain, ready to commence the Compostela.

Hondarribia to Oviedo April 10th to May 1st

The change of food and wine was immediate and striking. In keeping with this change was the warmer weather. We were walking longer but eating much less, either because we didn’t need the food to keep us warm (that said we still had some very cold days) or else we were more efficient, or both. From heavy meals and red wine we suddenly were having seafood and rosé. Often depending on the region, it was a specific seafood. One town had several restaurants but they all barbecued fish in exactly the same way. Galencia did octopus.

The first day along Camino del Norte we saw not one bit of coast – the fog was thick and relentless. But over the next days, this gave way to paths along the cliffs, occasional walks on beaches, and quite a bit of walking on roads. It also included lots of wind turbine covered hills and eucalypt forests whose strong smell transported us back home and we had twinges of being home sick. In addition, there was a lot of quite amazing urban stretches. True, out of Bilbao it was hot and horrid, but other long sections of colorful graffiti and well thought through paths in red cages and wired fences were actually spectacular. Heaters were no longer a given, so our packs were now adorned with drying clothes.

There were boat trips too, all legitimately part of the Compostela. One brief train trip as the train had replaced a boat and the alternative was an extra 30km or walking illegally on the train bridge. Little English was spoken which made booking ahead challenging but if you learn dates, days and keep repeating them with like your name or nationality it’s amazing what you can do.

Santillana Del Mar with its torture museum and waiters doing aerobics to aerate the local cider should be on everyone’s list. Then finally through the outskirts of Oviedo into the old center to make the final assault.

This is the third of four posts by Simone Sinna, the first was Cluny to Le Puy, and the second is Le Puy to St Jean Pied de Port, the last is along the Camino Primitivo to Santiago.