On the road from Santo Domingo de la Calzada to Belorado 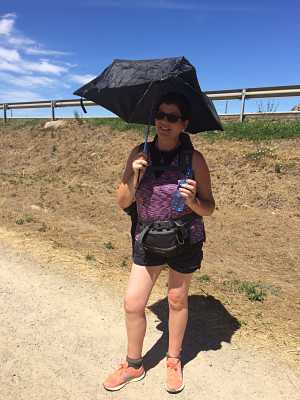 Fools! We should have left at least an hour earlier. We walked 23 kilometers today on a fairly easy route of gravel paths, tarmac in places, which ran most of the way parallel to the N120. There were no major height differences;  240 meters in ascent, 100 meters in descent. Easy peasy, apart from the fact temperatures hit 38 degrees, and we were walking in an area with absolutely no shade.

I will be honest it was brutal and I personally found today boring and monotonous. And that’s not the fault of the Camino, but quite possibly the extra glass of wine I had the night before!

Granon was the first village we came to and there was a short, sharp climb to reach it. What goes up must come down and it was tough on our knees on the steep descent afterward.  At least on this part of the Camino pretty villages such as Granon, Redecilla del Camino, Castildelgado, and Viloria de Rioja broke the monotony of walking. This was also a relief as it meant plenty of water stops along the way, unlike the day before when we had to walk long distances between villages and had to stock up well before setting off.

Another plus for walking in August was the sight of smiling sunflowers in full bloom, stretching in vast yellow swathes across the countryside. Last year we walked in July which was too early to see them at their most beautiful.

A few rounds of the ‘guess who’ game broke the boredom we were feeling; we took turns thinking of a person and the rest of the group would have to guess who. I think Pauline’s, Barra Best, lasted for at least a couple of kilometers between Villamayor del Rio and Belorado. For those of you who don’t know him, he is Northern Ireland’s most famous weatherman. And he has the best sounding name of anyone I know. 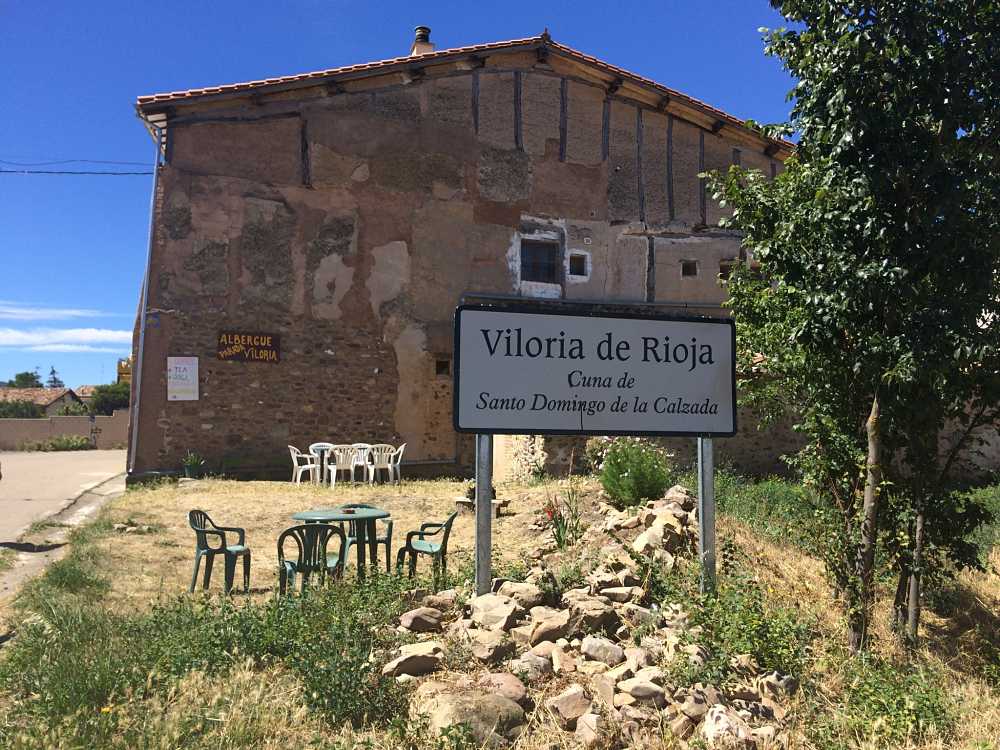 We had tried unsuccessfully to book an albergue for the night over the phone. As we are a large group we prefer to have our hostel booked at least a day in advance so we can stay together. The language barrier meant we were getting nowhere fast. The person answering the phone had no English and we couldn’t speak Spanish so we were at a complete loss.

Cue Lara, a friendly German girl we met at Castildelgado. She could speak five languages including Spanish. We handed her the phone and she had everything organized in minutes. We were so grateful to her and full of admiration for someone who has more than one language, let alone five. And it highlighted how ignorant and arrogant we are in speaking only our own language. I’m determined to have some level of Spanish before walking the Camino again. Duo Lingo may become my new best friend.

We walked for approximately seven hours today and arrived in Belorado just after 3pm. We stayed in Cuatro Cantone – a beautiful quaint place located in the center of Belorado behind the Plaza Mayor. I liked this place and would definitely recommend staying here.  It cost 10 euro for the night.  http://www.cuatrocantones.com – Tel: 947 580 591

Lara shared our cozy attic room. Six of us in 3 bunk beds and Lara in a single bed under the eaves. A big bonus was the garden with small swimming pool.  A perfect area to sunbathe, relax and to cool off in after the scalding temperatures of the day. 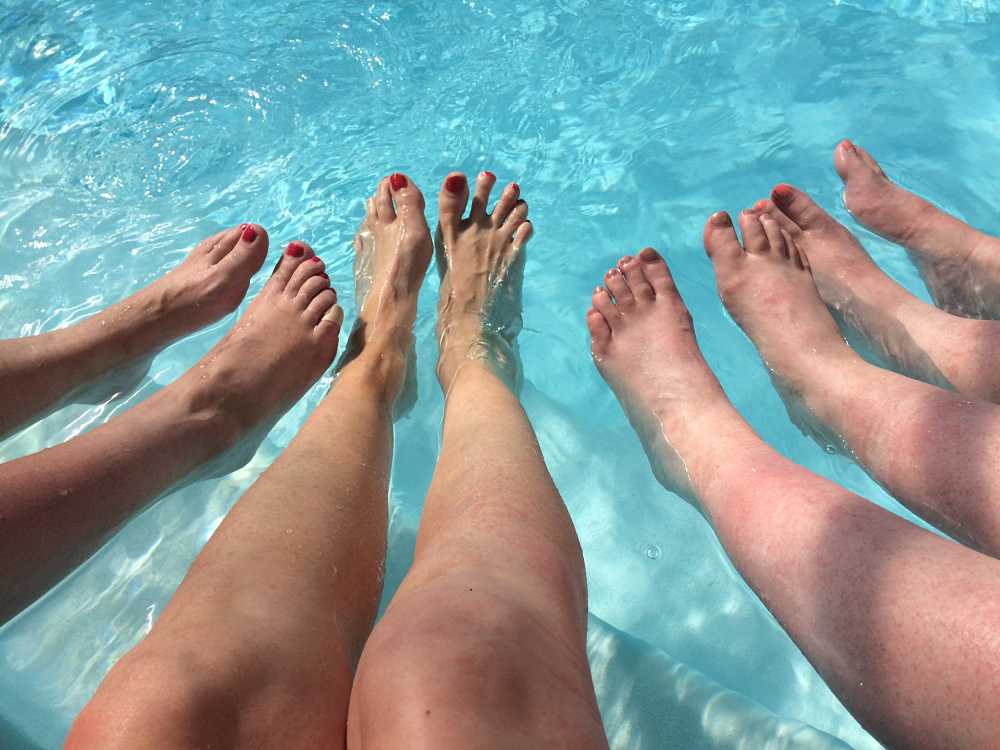 I wasn’t going to let the little problem of no swimming costume stop me. On the Camino no one cares what you look like and won’t blink an eye if you are going to swim in mismatched undies.

The pilgrim meal was delicious -garlic soup, baked hake and lemon cream for dessert – all for 11.50 euro including wine or water.

We met Oonagh, a teacher from Kildare over dinner. She was also walking solo and had booked through a company called, Road to Camino. Granted a more expensive way of doing it but they arrange everything for you, so you are paying for the privilege. Oonagh always knew where she was staying and where she was going to eat.

This organized way of walking the Camino may be reassuring for some, but I would find it too confining. Sometimes it’s only when you get lost or end up somewhere you hadn’t planned that you stumble upon those unexpected treasures you’re glad you didn’t miss.

We relaxed in the large plaza for a while before taking a walk around the town. There were some very impressive murals on the walls and we also discovered a walk of fame Hollywood style where famous athletes and actors have left their mark. Both Martin Sheen and his son Emilio Estevez have left their autograph, hand and boot prints while filming, ‘The Way’. A film people seem to either love or hate – I love it! We found Emilio’s prints but we couldn’t find Martins.  If anyone can tell me where they are, please do. Annamarie and I searched for what seemed like an eternity but finally, we had to give up in frustration.

And so we came to the end of our Camino for another year. I found it more relaxed than the previous year. Everyone knew what to expect so there was less friction and it was more enjoyable as a group. However, on the other hand, the scenery from St Jean Pied de Port still hasn’t been surpassed.  The experience of the Orisson still comes out tops and we didn’t connect with half as many pilgrims this year. But that’s the joy of the Camino, it’s a different experience each time you walk it. Here’s to the next 507 kilometers!

Sergio from Camino Facil (http://www.caminofacil.net – Tel: +34 610 79 81 38) took us back to Bilbao. We stayed here another day to give us a chance to explore the city and celebrate finishing another stage of the Camino.

We stayed in the cheap and cheerful Bilbao Central Hostel on Fernandez Del Campo, 24. info@bilbaocentralhostel.com

However, maybe in hindsight, we should have stopped being such skinflints and booked into a hotel. A little bit of luxury would have been nice. But we are good at roughing it at this stage! This post was written by Caroline McCoy, you can read another she wrote here and you can catch up with her at www.saysisaysshe.com  at instagram@saysisaysshe and www.facebook.com/saysisaysshe.