The Camino Frances leaves Najera behind the Monastery of Santa Maria la Real.  The route goes uphill along a dirt track through pine trees and across farmland heading towards Azofra, the first place to stop for breakfast and coffee.  Most of the walking today is through farmland well away from any roads.

Azofra has a few Pilgrims Hostels and is more an overnight stopping point than Najera.  There is a large relatively new municipal albergue with great facilities; all rooms have only two beds.

After Azofra there is a choice to walk the diversion to visit the Monastery in Canas. If you continue along the Camino Frances there is again choice of routes.

Often pilgrims decide against walking up the hill to pass through Ciruena, and walk alongside the N120 straight into Santo Domingo, which is less scenic and noisier route.  The main Camino route heads left up hill towards Ciruena and then back down over rough tracks to Santo Domingo.

The diversion route is the less scenic route, walking beside the road, and adds about 3 km to the total.  Lunch can be had in Ciruena, a good reason for staying on the main Camino path. Santo Domingo is a busy bustling old town.

Azofra is a small farming village that with a population of less than 300, like many villages along the Camino, it owes continuing existence to pilgrims travelling the Camino Frances.

There is little to see in Azofra apart from the Parish Church of Nuestra Senora de los Angeles, (Church of Our Lady of the Angels), which has two interesting statues, one of St James dressed as a pilgrim and another of Saint Martin of Tours attesting to the French influence in this area.

Diversion to Canas: leaving Azofra you cross the LR 206 and continue straight along the waymarked route.  To visit Canas turn left on the road and stay with the LR 206 for about 6km.  You will pass through Alesanco after about 2km, then about 4km further you will reach Canas. 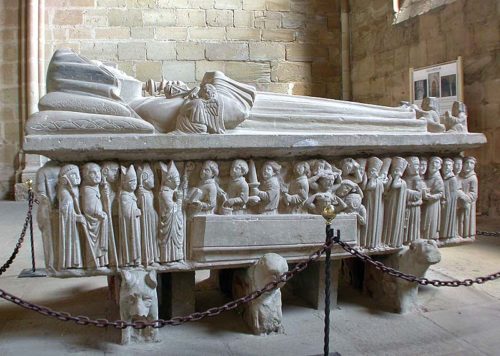 The convent is closed on Mondays. On the right just as you enter the village is the Cistercian Convent of Santa Maria de Canas, which was established in 1170.  The church was built in the Cistercian style, inside the magnificent retabol is of 16th century.  There is a small museum which houses the 13th century Gothic tomb of Dona Urraca Lopez de Haro, founder of the abbey. The tomb is thought to be the oldest and first sarcophagus of its type in Spain. The nuns of Canas makes and sell pottery and rosary beads.

Canas is the birthplace of Saint Dominic of Silos and apparently Saint Francis stayed in the covent while on his pilgrimage to Santiago.

Leaving Canas follow the LR 327 until you reach the LR 204, where you turn right and stay beside the road until Ciruena, total distance of about 6km.

Ciruena is a small hilltop village of only 130 inhabitants.  The first reference to the village dates to 972 when the town was donated to the monastery at San Andres by Sanchos Garcia II.

The Parish Church of St Andrew dates from 1965, however it has been built on a former Romanesque church that was first constructed in the 10th century.

Santo Domingo de la Calzada is named after Saint Dominic, (pop. 6,700), and has been declared a site of historic interest.  The tourist office is near the cathedral on Calle Mayor.

St Dominic was born nearby in the village of Viloria and studied at both the monastery of San Millan and Abadia de Valvanera.  However he did so poorly in his studies he was not allowed to continue.  This did not deter him from a life of religious service aiding pilgrims on the the way to Santiago.  He built a bridge at the westerly end of Santo Domingo over the river Oja, a pilgrim’s hospital, and hostel, (now a Parador).  The most interesting legend that surround him is the clearance of a  stretch of road between Najera and Redecilla de Camino.  It is said he used a sickle to cut 37km through the forest and when he stopped to pray angels continued to clear with the way with the sickle.  Another version of the same legend tells us that the villagers of nearby Ayuela give him permission to cut as many trees in a day for wood as he could with his sickle, he made only one cut felling a single tree, but the end of the day he had all the wood he required.  I prefer the first. 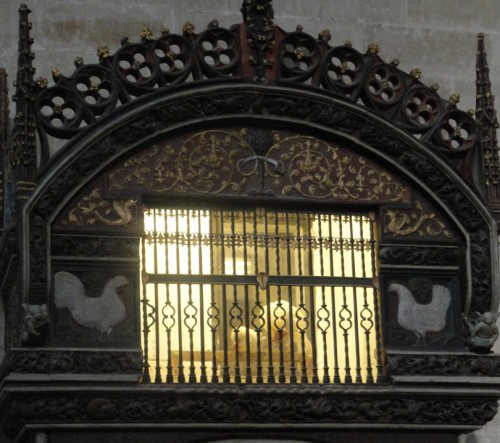 Santo Domingo de la Calzada is most famous for the legend of the cock that crowed again.  There, as is usually the case, are several version of this legend. A couple from Cologne were travelling to Santiago de Compostela on a pilgrimage with their son, Hugonell.  Apparently the innkeepers daughter took a fancy to him and he virtuously resisted her advances.  She took a silver goblet and hid it in his possessions, in the morning she denounced him as a thief and he was hanged.  When his parent were preparing to depart they heard his voice telling him that he was still alive; St Dominic was holding him up by his feet.  The parent ran off to tell the magistrate the story of laughed and said their son was no more alive than the cock and hen on his plate.  At that the birds grew feathers, jumped off the plate and fluttered around the room proving that their son was innocent.  There are various versions of this legend in other routes to Santiago at Utrecht, in Toulouse, and Barcelos.

As can be seen above there is a Gothic carved pen for a cock and hen inside the cathedral, where you are asked not to take photos, while surrounded by pilgrims snapping away.  The birds are changed every two weeks and the chicken coop is at the rear of the albergue run by the Spanish Confraternity. It is of course considered lucky if you hear the cock crow…

The Cathedral Santo Domingo de la Calzada is a mainly Gothic construction built over St Dominic’s original Romanesque church.  Again it is a church that has been built many times over the years; after the original work during 10th and 11th century a second wave of construction added some French Romanesque influence during the 13th and 14th century; as the pilgrimage boom declined the church crumbled and the bishop in the 14th century offered indulgences to donnor for restoration, which were mainly defensive; the nave was reroofed in the 16th century with side chapels being added later; then during the 18th century, 1762, the sixty nine metre Baroque tower was added.  It is worth putting aside at least an hour to fully see the cathedral; or at least take 10 minutes to pay your respects to Santo Domingo at his tomb inside.

My thought for today is inspired by the girl in the inn.  Her behaviour was an outlandish illustration of control and revenge.  It make me wonder where I try to control others and when I am thwarted do I wish for revenge.  I see revenge in actions that are designed to hurt or punish.