Next day: Larrasoana to Pamplona

For me leaving Roncesvalles is a dream as the route is mostly downhill a welcome change after yesterday. 300 meters after Roncesvalles you will come to the Cruz de Peregrinos a 14th century Gothic pilgrims cross, which was moved here in 1880 from further up the mountains.  The cross depicts King Sancho el Fuerte and his wife Clemencia.

The Camino Frances follows the side of the N135 for most of the day – which is a quiet country road that weaves down the foothills towards Pamplona; initially is tree lined and most of the day is easy underfoot.

Two km after leaving Roncesvalles the track turns towards and passes through some farm buildings.  This was my first experience of barking Spanish dogs; it encouraged me to purchase a walking stick shortly thereafter.  I don’t like dogs much and try to avoid the barking ones, though over a four week period it was only an issue three times.

Burguete 3km there is a cafe in the village which supplies the passing pilgrims with breakfast.  Burguete is where the revisionist history moved the Battle of Roncesvalles to.  It was thought that it was noble that armies met and fought on open ground rather than at Valcarlos, in a valley, where the battle took place.

Espinal 3.5km food shop, pharmacy and again a café that is open from early in the morning and caters to the passing pilgrims with breakfast and coffee, in the midst of the quaint narrow one street village.

Espinal was founded in 1269 by King Theobald II of Navarre, however nothing of note remains in the village.

Alto de Mezquiriz 2km, the alto is mark with a plaque of the Virgin and Child.

Linzoain 2km, water.  Within this small village the local church is named after Saint Saturninus a French saint.  This is one of the many reminders along the Camino Frances of the strong French influence from 900 years ago on the Camino Frances.  The church is of 13th century construction in Romanesque style.

Alto de Erro 4.5km, Camino information board. Here pilgrims of the past venerated a two metre square rock known as Rolland’s footsteps.  Medieval sources regard Charlemagne and Rolland as discoverer and defender respectively of the Apostle’s tomb and the pilgrim route to Santiago even though there is a difference of more than 200 years.

The Camino descends towards Zubiri, however the actual Camino does not cross the River Arga into the town, though most pilgrims do.   It is a good sized town with a few bars and cafes, (there is also an outdoor swimming pool near the municipal Albergue).  Many pilgrims stop here rather than continuing to Larrasoana, however I carry on wishing for more time in Pamplona the following day.  The worst part of today’s route is just after Zubiri where we pass some garish factories and climbing out of Zubiri.

Zubiri is Basque for Village of the Bridge; it was believed that this Gothic bridge over the River Arga was able to rid animals of rabies by driving the livestock three time around its central pillar – this is why the bridge was also know as the Bridge of Rabies.  This power to ward off the disease was attributed to the relics of St Quiteria which are buried in the abutment of the bridge.

Larrasona is also entered over a bridge however this one was know as the bandits bridge as narrow obligatory passing places like this were favoured to rob pilgrims.

Larrasoana was mentioned in Picaud’s pilgrim guide and has kept strong links with the Camino; today the village warmly welcomes pilgrims and provides an outbuilding with mattresses when there are too many pilgrims for the hostel.  In the 11th century there was an Augustinian monastery here and in 1174 the village declared “Villa de Francos” – a community for French settlers, then in the 13th the now local church dedicated to St Nicholas was built. 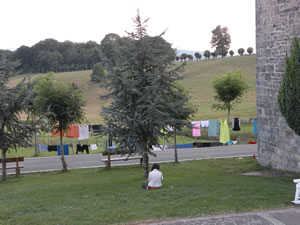 After the previous day this day from Roncesvalles to Larrasoana is a walk in the park.  However for many their body will be still stiff and tired from the walk over the mountain from St Jean Pied de Port.  We have now left France behind and the rest of the route is across Spain, so having a little Spanish will help – however it is not required as I have managed to get by twice on the Camino Frances without any Spanish.

The route from Roncesvalles to Larrasoana is about 27km and not a tough day.  Look after your feet.