Once again the Camino Frances follows closely to the N120.  Most of the day it runs along side and occasionally diverts into towns and across fields.  The route is fairly easy going underfoot with mostly gravel paths along the side of the road and farm tracks when away from the N120; but as usual on the Camino there are many ups and downs.

Leave Santiago Domingo along Calle Mayor and cross the bridge over the River Oja; the bridge that was originally built by St Dominic.  Later today we will walk through Viloria de Rioja, his birthplace. The first uphill climb is short but steep into Granon, and the route descends steeply afterwards.

You cross the La Rioja – Castilla border about 2km after Granon while strolling through the middle of corn fields and farmland.  The earth and landscape changes as you enter wheat country.  The next coffee and watering stop is not far – Redecilla del Camino, another small village.  Every few kilometers today there will be a small village for water, food, and refreshments.

Belorado has all the amenities of a modern town; it is the main rural centre for the area.

Halfway between Santiago Domingo and Granon there was the Cross of the Brave, (it has now be replaced by a sign), this marks the site of a local Granon legend.  It is said that the villagers from Granon had disputes and altercations with citizens from Santo Domingo, as they cut down trees on disputed land at Ballana.  The two towns put forward their champion to fight in order to decide who owned the land.  The Legend of the Brave says the fighter from Santiago Domingo arrived smeared in oil and the only way Martin Garcia, from Granon, could hold him was by a finger in his anus – which he used to throw him away and thereby winning.  Martin Garcia asked the villagers to say a prayer for him each day on the anniversary of the fight as he passed away days after the fight. 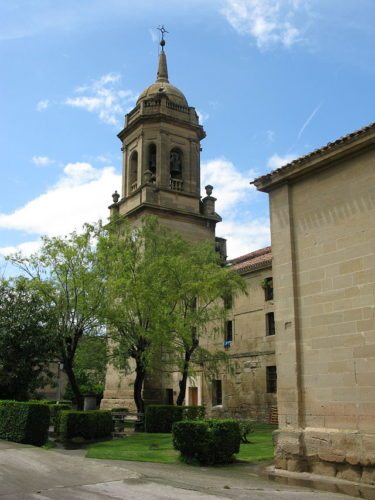 It is a steep walk uphill into Granon the first village after Santiago Domingo. Granon is small and has little to hold the pilgrim for any amount of time, except for the main church which also houses the albergue.  This is one of the friendliest albergues along the Camino; I have stayed there twice now.  In the evening they have a communal dinner – sleeping is on floor mats within the church bell tower.  It is worth at least stopping to climb to the top of the bell tower for the views of the surrounding countryside.

The parish Church of San Juan Bautista dates from the 14th century and was part of the monastery that also existed at that time here.  The exterior of the church is plain and undistinguished.  There is a baptismal font that dates from 1099 and is all that remains of the original church.  Inside there is a restored exquisite 14th century high altarpiece, created between 1545 and 1556, which almost looks out of place in the otherwise plain village church.

The parish Church of Nuestra Senora de la Calle has a must see Romanesque baptismal font, perhaps the most important font on any of the Camino routes.  It depicts a heavenly Jerusalem atop eight columns and a serpent curled around the base signifying the triumph of God over evil. 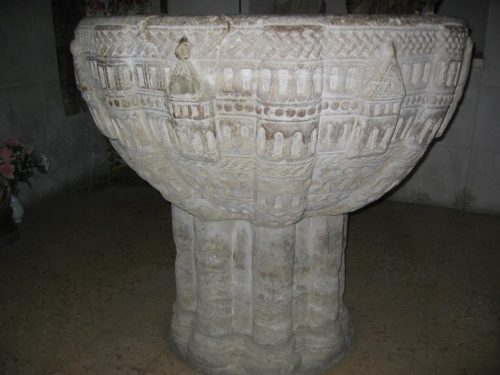 A small village with only 60 inhabitants, that has however existed since 926, with the 16th century Church of San Pedro.

Saint Dominic of Santo Domingo was born here in 1019.  The house where he was born was demolished during the late 20th century and the baptismal font where he was baptised has been removed from the church.

Interesting that this village was known as the ‘People of the three lies’; it has no river, (Rio), had no villas, no mayor, (major or greater).  The ‘no villas’ part of the lies is likely attributed to the cave dwelling where the early villagers lived.

Belorado with a population of just over 2,000 was a welcome resting place for me in 2004.  I only walked 12km this day and rested during the afternoon by the outdoor public swimming pool, after finding a pension for the night.

Belorado was a frontier town resettled by King Alfonso I of Aragon in 1166, he granted it special privileges and fortified it to encourage settlement to provide a buffer against his stepson King Alfonso VII of Leon.  However Belorado had been occupied since Roman times.  The resettlement led to boom years for the town, by the 13th century the town had eight churches.  Like many towns in this region it was split into ethnic areas; the French, Castilian Christians, Jews, and Muslims.  Each neighborhood had its own judges and traditions.  Interestingly through most of the middle ages Jews, Muslims, and Christians lived together in relative harmony until 1391 when there were anti-Semitic riots, and then in 1498 Jews were expelled from Spain. During this time Muslims and Jews were exempt from local taxes, however they were required to keep one of the city’s defensive towers in good repair and another law required two from the Jewish community to sweep the city street every Thursday.  Perhaps another reason for the prosperity of Belorado during the early middle ages was its refusal to pay a yearly tax to the church at Santiago de Compostela.  The tax was imposed by Ramiro I after his victory at Clavijo.  While  claiming the King had no jurisdiction over the town, Belorado manage to fight off paying the tax until it was settled in 1408.

Due to its frontier town status little only ruins remain of Belorados’ early buildings.  The Church of Santa Maria, originally the castle church, central nave dates from the 15th century, while the rest of the building is much later.  It has an interesting stone retable, which features both Santiago Matamoros and Santiago Peregrino.  There is also an interesting ivory Christ and a Romanesque Virgin statue. The church is built against the limestone cliffs and some ancient cave dwelling are still visible behind the church.

The Church of San Pedro was completely reconstructed during the 18th century.  The interior has some original pieces that include a rococo altarpiece and various pieces of art.  The Church of San Nicolas is the oldest remaining church which is a ruin. It has an attached clock tower which is accessible by an internal staircase.

My thought for today is inspired by a Frenchman that I talked to this day.  I passed him a few times, he caught up with me at each village. We and had coffee together and he kept telling me to slow down and not hurry; that I needed to listen to my body and walk at the pace it suited.  Eventually I did and my head followed and also slowed down.  Do you listen to your body much or are you like me and driven by your mind?