Today is it fairly obvious that we are near a large city.  There can be the sound of traffic from the new motorway and at times you have to cross it on a footpath and go under it by way of underpasses.  Leaving Viana you walk through olive groves and vineyards passing the Ermita de la Trinidad de Cuevas.  The hermitage is the only remains of the village of Cuevas which was one of the eight villages that formed Viana in 1219.  There are records of a church here existing since the 13th century, it was  run by the convent of the Trinitarians, an order which cared for pilgrims.

The way into Logrono is a slight shock to the senses – being used to walking in open areas away from main cities.  However it is a short walk into Logrono unlike the long hike into Burgos.  The route out of Logrono is initially through parkland and shaded with trees, after reaching the end of the reservoir there is only 6 km to Navarrete.

The Camino enters the main part of Logrono over the impressive, though narrow, “Bridge of Stone” and turns right at the end down Rua Vieja.  Walking into and out of cities along the Camino are the only times that it is easy to get lost.  In the countryside the large yellow arrows are easy to see, however the sign posting in the cities is not as clear.  Often there are smaller arrows on the sides of buildings or on trees, though the most common marking is by way of scallop shells on the pavements.  It is almost impossible to get lost for long – if you are far off the way locals will stop you and point you in the right direction, the Spanish along the Camino Frances are extremely helpful. 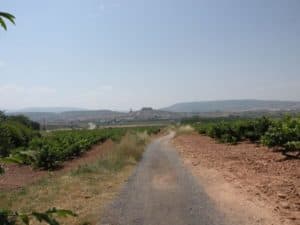 Leaving Logrono it becomes obvious that you are in La Rioja, the rest of the day is mostly through the vineyards that produce the beautiful wine of this area and leads you into the medieval town of Navarrete.

There are few places to eat or fill with water outside of Logrono today.  Today is one of the few days where it is good to carry some food with you for the second half of today’s walk.

By the time you walk into Logrono, (population 150,000), you have entered the Rioja region famous for its wines. Logrono is a bustling university city, first inhabited by the Roman, the the Celts.  From the 10th century the Kings of Castile and Navarre fought for possession of the town.  Culturally there is enough to keep you entertained for at least a day and is a common resting point for many pilgrims.

The tourist office has been moved from Paseo de Espolon to School Trevijano, 50 Calle Portales, it is about 5 minutes walk north west; it is also the location of the Cathedral. They can arrange accommodation, wine tours, and free bikes to explore the city.  The area around Calle Portales is pedestrianised and has good shopping a lot of good restaurants. 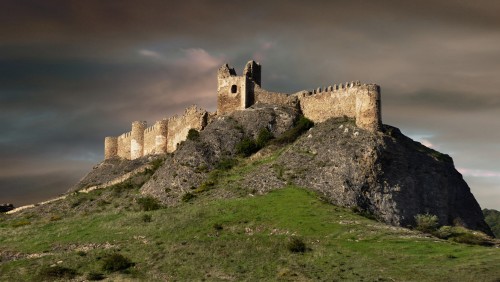 If you decide to rest for a day in Logrono a trip to Clavijo is only 20 km south.  The castle at Clavijo is one of Spain’s most symbolic castles.  Clavijo is associated with the reconquest of Spain and where St James first appeared as the Moorslayer during the Battle of Clavijo, (834) to Ramiro I of Leon.

It was Alfonso VI that built the bridge over the Ebro in 1095 as he wanted a loyal and strong Logrono.  He helped create a prosperous town by granting a charter, fuero, which formed the basis for many medieval Castilian charters.  It freed peasants from forced labor and controlled the abuses of the nobility, forced the sale of uncultivated land to new farmers, established the rights of access to pasture and water for irrigation, and most importantly freed commerce from import duties, tolls and other taxes.  However as the town prospered it became a valuable target for its enemies.  There are few Spanish town that have been fought over as much as Logrono, this explains why so few early medieval monuments are left intact.

The Church of Santa Maria de Palacio was commissioned in the 12th century.  As is the case with much of Logrono nothing remains of the original building.  The tower is 14th century, cloisters 15th, some early Gothic arches, the transept, and capitals exist from the 13th century. The inside of the church is a mash of styles; the west end is capped by tiny cupolas, the east with elegant Gothic vaults.  The main altar retablo has an odd imbalance; the top row of figure and the exterior columns are disproportionate to the  rest of the structure, and the Last Supper has Christ and the disciples crowding around a folding table. All of this aside it is an elegant church worth seeing.

The Co-Cathedral of Santa Maria de La Redonda is the only co-cathedral in Spain.  The bishop is shared between this location and the cathedrals in Santo Domingo de la Calzada and Calahorra.  A church was first built here in the 9th century, however the current cathedral is much later due to the wars that were fought in and around Logrono.  Stylistically the cathedral gives the appearance of a fortress church with its square thick walls and tall towers.  The Baroque facade and towers date from 1752, the lower parts of the towers are plain to provide a contrast and not to compete with the facade. 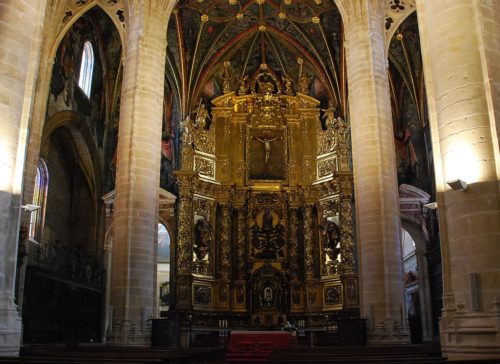 Inside the cathedral the retablo is typically Baroque, theatrical and dramatic, some of these frames can be overwhelming in their excess.  In the right aisle there are Hispano Flemish paintings, however the more interesting piece is a painted crucifixion by Michelangelo in the church behind the altar.

On the route through Logrono you pass the baroque Pilgrim’s Fountain, (Rua Vieja) and the Church of Santiago el Real.  Legend tells us that there was a church here built by Ramiro I after his victory over the Moors at Clavijo during the 9th century. However the current church dates from the 15th century and is of Gothic construction.  Almost every piece of of the church is dedicated to St James in his dual role as the gentle pilgrim and as Santiago Matamoros, the Moor slayer.

Local legend links the Convent of San Francisco, beside the river, to St Francis of Assisi.  He stopped in Logrono and while there healed the son of a local nobleman.  The nobleman in gratitude built the convent and apparently on his way back from Santiago St Francis was able to see the work already in progress.

You leave Logrono via the only remaining city gate, on the west side, called Puerta del Camino.  Carlos V rebuilt the gate, cica 152o, it is adorned with his large coat of arms so everyone would know the Habsburgs had taken over.

After the cafe restaurant, El Pantano, about 4km from the centre of Logrono at the end of the reservoir, there are no more water fountains or cafes. It is best to fill with water and perhaps take some food to eat during this 12.5km stretch.

Just before Navarrete stands the ruined Hospital de San Juan de Acre.  The hospital was founded in 1185 and flourished during the middle ages, however reports from 1568 mention that only lower floor was usable due to the collapsing roof.  The Carlist War finished off the destruction and in 1886 the portal was moved to the the west end of Navarrete to serve as the entrance to the cemetery.

Nothing remains of the original Navarrete castle and defensive walls, they were destroyed in the early 16th century during the war to incorporate Navarrete into Spain.  The village still retains its 16th century concentric street, best viewed on a map from above.

The Parish Church of the Assumption from the 16th century is a magnificent triple aisled construction illustrating a mix of Renaissance coffered barrel vaults and Plateresque motifs, the first of their style in Rioja, and one of the most stunning Baroque retablos in Spain. 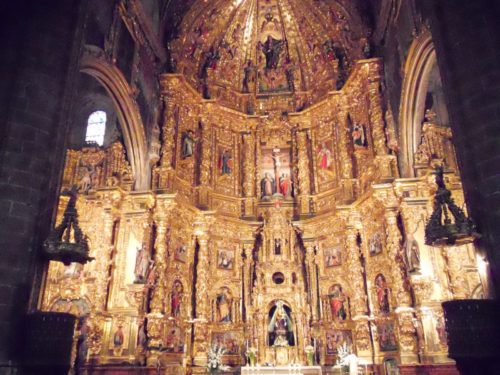 This area has me thinking about destruction and growth.  Is there something in me that needs to be torn down and rebuilt better? 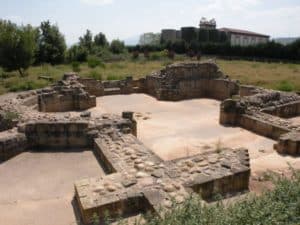 These photos are from the seventh day of walking on the Camino Frances, where we ended in Logrono.

Logrono is one is the smaller cities along the Camino Frances in Spain.  However there are plenty of shops and if you are missing any essentials you will be able to get them here.

Walking around this area is great in the autumn when you see the grapes ready for harvest.   However don’t make the mistake that you can just help yourself to the grapes as this is someones livelihood.

The city is the capital of the La Rioja region which we are walking in and is famous for its wine.