I met Mony, one of the authors of Walking for Peace, at a conference about the Camino de Santiago in October 2015.  I found Mony an engaging person to chat with and discovered during one of our talks that she had written this book. Because of that, I bought and read the book.

“Walking for Peace, an inner journey” is co-authored by Mony Dojeiji and Alberto Agraso.  The book is the result of Mony wishing to walk from Rome to Jerusalem; a walk of 5,000 kilometres over thirteen months and through thirteen countries.  The book is relevant to anyone who wonders what walking this distance is like, or anyone interested in pilgrimage or peace – though really the journey becomes an inner journey rather than an outward, so if you are interested in personal transformation you will likely enjoy.

What do Others Think of Us 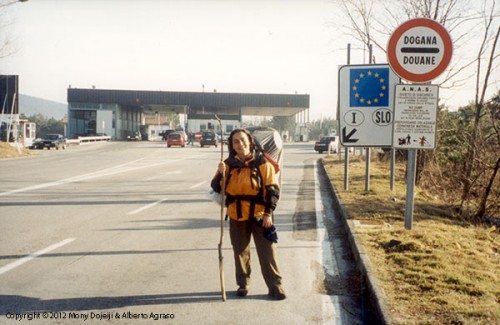 It is fairly obvious from the start of the book that Mony is going to be asking many questions of herself:

“If I mentioned I was on a spiritual journey, a quest to know myself, would they think I had become a religious fanatic?”

Neither Mony or Alberto follow a religion, but both are continually seeking spiritual growth.  That spiritual growth comes about by personal change, not by any external changes in circumstance.

“prophetically, to change the world, I needed to change myself first.”

Even when we know this it is interesting how we still fight against change – the implicate threat in changes moves us out of comfort into areas where we have not yet learned to adjust.

Mony had visited a friend in Germany, who she had met on the Camino de Santiago, to ask if she would walk this route with her.  Hannah, her friend, did not want to walk, she appears to want some stability of place and work; though Alberto who Hannah lives with feels he see signs that tell him to go on this pilgrimage.

Alberto asks if he can come along and a shocked Mony says yes.

Friction Between Mony and Alberto

Alberto could not join Mony at the start of the walk out of Rome and Mony walked the first 120 km alone.  After twelve days they meet in Rieti.  One of the themes throughout the book is both of them being challenged by either others view of the world – however Mony is challenged by Alberto more.

Alberto does not have the money to stay in hotels and hostels each night.  His solution is:

“Since this is a pilgrimage, a spiritual way,” Alberto replied, “I was thinking I could sleep in churches and monasteries. I met an old man on the Camino who had no money, and so called on the churches for help. They usually gave him food and shelter. I won’t ask for food, money or even a bed, only for a roof over my head. I can sleep on the floor. If they refuse me, I can always sleep in my tent.”

Mony appears to have a strong sense of independence that forbids her asking for help when she does not need it – but I can’t imagine her never needing help, but rather being more comfortable when helping others.  The idea that they should sleep in churches and monasteries turns out to be a great idea that helps their journey through various countries.

“I’ve gone from being an independent woman walking for peace to a poor pilgrim seeking refuge. All because of Alberto.”

They discuss carrying a sign for peace, they had already bought yellow stick on paper for the letters a few days before.

“I agree the timing is good,” I replied, “but I don’t want to tell people we’re messengers.  Its sounds presumptuous. I mean who are we?” (highlight is mine)

Who am I? What right do I have? These are questions I have asked myself often.  Who am I to write a book about the Camino? Who am I to do anything that is worthwhile almost.  It can appear that someone else is more qualified, always. Fear?

The best description of fear that I have ever read is from the Life of Pi: 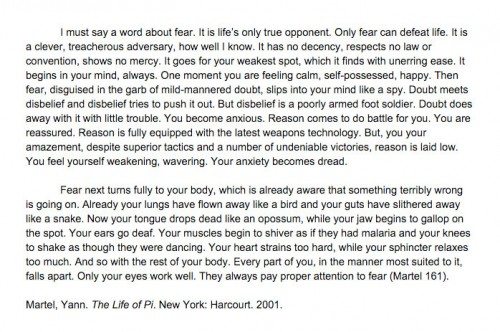 “I must say a word about fear. It is life’s only true opponent. Only fear can defeat life. It is a clever, treacherous adversary, how well I know. It has no decency, respects no law or convention, shows no mercy. It goes for your weakest spot, which it finds with unerring ease. It begins in your mind, always.”

We all have one.  It is our solid ground on a sea of time and a constantly changing environment.  Like many my personal identity helps me in some areas and is a road block in others.  This identity was created long before I knew it was there, with few decisions from myself.

Mony’s identity is rooted in business, an MBA, a great job with a software company, marriage, a dream home – but it appears that this did not produce happiness or contentment.  And then one day it all fell apart when her husband “announced he was leaving for another woman.”

On her search to heal and find meaning she started to discover “that I was the creator of my world, not its victim…” this results in Mony leaving her job and travelling the world.  Eventually, she found her way to the Camino de Santiago.

I bought this book in October and had a quick look through it.  I saw areas that would challenge me and my beliefs and, therefore, decided to put off reading the book until the Christmas holidays.  Despite some experiences I am firmly rooted in the physical world – I hold no or very few metaphysical beliefs.  This book challenges those beliefs and it is an area that I am not comfortable occupying.  Books speak to me differently at different times.  For example, I can read a book that has a profound effect on me and later in life re-read and wonder why it had that effect the first time or vice versa.  This is completely down to where I am in life at that moment.  My daily life, like most people, is work and business – while here I can become too cynical of anything that does not agree with my reason.  Hence waiting until Christmas when work would be out of the way for a few weeks.  I am glad I made that choice as I thoroughly enjoyed Walking for Peace. 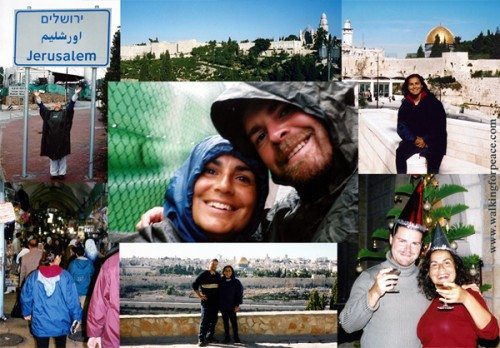 I will leave the last word to Mony and Alberto, they quote the following – which was popularized by Nelson Mandela when he mentioned it during his inaugural speech for the South African presidency. It came from the book “A Return to Love” by Marianne Williamson

“Our deepest fear is not that we are inadequate. Our deepest fear is that we are powerful beyond measure. It is our light, not our darkness, that most frightens us. We ask ourselves, who am I to be brilliant, gorgeous, talented and fabulous?   Actually who are we not to be? You are a child of God. Your playing small doesn’t serve the world. There is nothing enlightened about shrinking so that other people won’t feel insecure around you. We are all meant to shine as children do.   We were born to make manifest the glory of God that is within us. It’s not just in some of us, it’s in everyone. And when we let our own light shine, we unconsciously give other people permission to do the same. As we are liberated from our own fear, our presence automatically liberates others.”

You can buy Walking for Peace on all Amazon stores, US here

, and at all good bookstores. 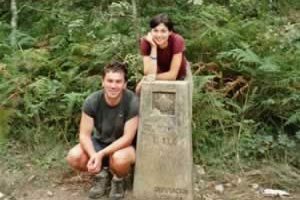