Day 6 on the French Way find us sleeping overnight in Los Arcos. When I last stayed in the main hostel in Estella they severed breakfast – not something that you will get at many hostels. It was coffee, tea, and bread with jams, enough to get me going and miss the early cafes in Estella and continue to Villamayor de Monjardin before stopping for something to eat and drink, about 8km.

There are two routes leaving Estella the main one which stays on the right hand side of the N111 and the other which is not so well sign-posted on the left hand side of the same road.  Cross the road and walk the second route to see one of the most talked about sights of this day.  There is a wine fountain “Fuente del Vino” shortly after leaving the main part of the town beside the Monastery of Nuestra Senora la Real de Irache.

Both paths join again just before Azquata and then head uphill to the highest point of the day at Villamayor de Monjardin.  Eat or buy some food here and fill up with water as it is 12 km to Los Arcos without any more village stops and only one not very appealing fountain for water along the rest of the route.

The Day starts at about 400 meters and reaches its height at Monjardin around 650 meters.  From here to Los Arcos you will be walking along gravel tracks that are surrounded by vineyards and farmland.  There are great views down along long sloping tracks, which make the latter half of the day easy on the eyes and the feet.

The main Albergue in Los Arcos is at the far side of the town it is big and comfortable – but can be noisy from outside at night.  In Los Arcos I ran with the bulls during a fiesta – it was an invigorating experience, make of that what you will. 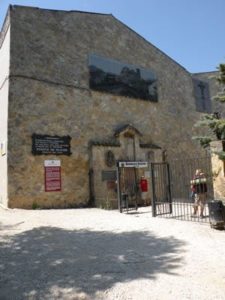 The wine fountain is part of the ancient Monastery of Irache in Ayegui which is essentially a suburb of Estelle, it is the best known wine fountain along the Camino Frances and maybe Spain.  There are two fountains, built during 1991, which are known as the Wine Source and Source Irache, one dispenses wine and the other freshwater.  The fountain is gated and open between 8 am and 8 pm daily.  There are two signs at the fountain:

“We are pleased to invite you to drink in moderation. If you wish to take the wine with you, you will have to buy it.”

“Pilgrim, if you wish to arrive at Santiago full of strength and vitality, have a drink of this great wine and make a toast to happiness.”

A short distance further on the left is the Monastery of Santa Maria la Real de Irache.  It was founded in the 10th Century and vacated in 1985 because of the lack of Novitates, the earliest records of the monastery date from 958.  A pilgrims hostel was founded in the monastery in 1054 by Don Garcia de Najera. In 1060 King Sancho el de Penalen gifted the town to the monastery; the inhabitants of the town then paid taxes in wine, wheat, and labor.

The monastery achieved great grandeur in the 11th century under Saint Veremundus who greatly increased the wealth and prestige.  A Romanesque church was started in the late 12th century and completed in the early 13th century.  The church contains a 14th century Virgin del Rosario and a French Gothic crucifix.  The monastery entered a period of decline from the 13th to the 15 century.  A new Benedictine community from Valladolid established a school in 1522 and later in 1605 the Benedictine university in Sahagun was transferred to Irache where it continued to grant degrees in theology, philosophy, medicine, and canon law, until the early 19th century.

Today it is worth stopping to see the very well preserved cloisters and the church.  However many visitors will be there to visit the Wine Museum or the Bodega.

There are reports of a small 9 person albergues in the village.  If you have more detail please forward to me for inclusion in the next update, thanks. It is said that the village was given to a knight in 1128, who had caught thieves who had stolen treasure from the monastery at Irache.  However, by 1346 the village was owned by the church in Pamplona.  It is a small village that you will pass through in two minutes unless you stop to see the 16th century church of San Pedro.  The church tower is the 20th century, however, the rest of the building is a mix of Gothic and Romanesque.  Interestingly the 17th century sculptor appears to have used the angel of the Annunciation as an opportunity to study the naked human form.

Just before Villamayor de Monjardin, there is an unusual 13th century Gothic Fountain of the Moors.  There are steps that lead down internally to the water level.  The fountain was restored in 1991.

After Villamayor, the highest point of the day, there are no villages, food or water, until Los Arcos, therefore, stock up before leaving.  It is a pleasant 12km through open countryside with little shade to Los Arcos, there is a fountain along the route but the water is not drinkable.

Still a few kilometers out from Villamayor de Monjardin the skyline is dominated by the 17th century Baroque tower from the Church of San Andres. The church is a 12th century Romanesque construction with a barrel vaulted roof and semi-circular  apse.  One of the capitals on the south side illustrates a combat scene of Roland fighting Ferragut.  The most valuable of the church’s treasure is the 12th century silver Romanesque processional cross.

On top of the hill is the ruined castle of San Esteban de Deyo, (St Stephen).  The castle base is roman, however, the castle itself has been reconstructed after each of the many conquests it fell to.  It was the last major Moor stronghold in the area until it fell in 914 and was captured by King Sancho Garcia.  In Pseudo-Turpin tales Charlemagne supposedly captured the castle, this is thought to be french propaganda to stir interest in Iberia.  However, an interesting tale emerges from this story: Charlemagne before marching his troops into battle the next day asked God to indicate which of his troops would not survive.  On the morning of the battle as the troops put on their armor, 150 men were marked on their backs.  These troops were told to stay back and guard the camp, however after the battle when Charlemagne returned the 150 had mysteriously died. (Perhaps a message to Charlemagne not to out-think God)

All services, this is a large town.

In Los Arcos, I ran with the bulls.  It was not planned, there was a local fiesta and I went to watch it. On the spur of the moment, I decided to tighten my sandals and jump into the square.  It was an incredible event in my life that I will never forget.  However there were other pilgrims that were hit by the small bulls, so care is certainly required.

Like many small rural towns, the population has nearly halved since 1960; from 2,057 to 1,182 in 2013.  However, the town has all the facilities you will need as a pilgrim along with enough sights to visit.

The Church of Santa Maria is the most notable building in Los Arcos. The church has a mixture of architecture from the 12th to the 18th century including Romanesques, Gothic, plateresque, and baroque. Items of note are the Gothic cloisters, highly ornate plateresque north facade, and the richly carved plateresque choir stalls, all overlooked by the polychrome  Gothic statue of Santa Maria. The bell tower is Renaissance and was completed in 1590; it is interesting to note the impression of height by each of the 4 stories being slightly smaller than the previous.

Las Arcos has been inhabited since Roman times, the five Roman tombs discovered at the entrance to the town attest to this.  The town was retaken from the Moors in 914 by Sancho Garcia.  However, this was far from its last battle. Due to its frontier location near Castile and Aragon, it was a frequent military target and by the mid 12th century the town was protected by a castle, (now a ruin).

On the way out of Los Arcos just over the River Odron, which was believed to be a deadly river by Aymeric Picaud, is the Ermita de San Blas.  This hermitage, now part of a private dwelling, was a hospice for lepers.  This brings me to my thought for today.  Luke tells us that Jesus healed ten lepers.  Nine ran away and one stayed to thank him.  Human nature.  Am I thanking people, am I expressing gratitude?

This day is 23 km and not too hard – unless you end up walking in the mid-day sun in July or Aug – that should really be avoided.

Again we are out of step with the majority of pilgrims who would be stopping at Estella today.  It is also great to stay in quieter places, the albergues, and hostels that are not the places where a day map in a guidebook ends. (See the best Camino guidebooks)

One item not to miss today is the wine fountain – there are photos below of it.  Many pilgrims stop here and try the local wine, others have problems walking to their destination as they fill a bottle…  What can I say?