Long before the discovery of St. James’ relics, there was Cruachan Aille in Ireland. The sacred grounds had been there since 3,000 BC and attracted pilgrims from all over Europe. Pagans frequented the area and so did early Christians when it was popularized by St. Patrick. When Camino de Santiago became famous, the ancient pilgrimage was sadly forgotten in favor of Spain’s. Memories of these medieval footpaths aren’t completely lost, however, and revivalists are attempting to reclaim the pilgrim routes of Ireland.

There are currently 12 footpaths available, including one that takes you to Cruachan Aille or Croagh Patrick. Five of them are medieval pilgrim routes covered by the National Pilgrim Passport. Pilgrims can get their passports stamped at the end of each participating route. Those who finish the combined 125 km stretch will be awarded an Irish Pilgrim Paths completion certificate. Whether you’re walking the medieval trails or taking less trodden paths, both are excellent ways to familiarize yourself with Irelands’ rich heritage and unspoiled landscapes. 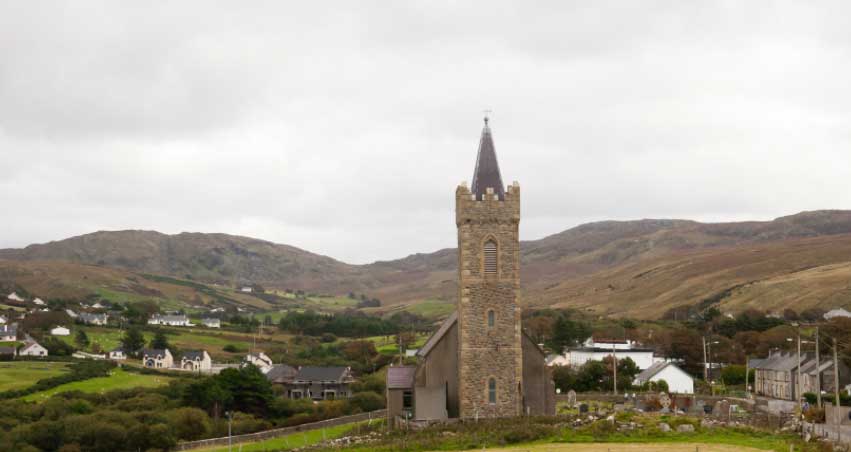 The route takes you through an expansive yet hidden Gleann Cholm Cille, an area known for its pillar stones. The pillars are spread across 14 stations along the 3.4 mile route but are also accessible from an alternative 4.5 mile route. The best time to walk Turas Cholmcille is on St. Colm Cille’s Day on June 9, when all stations are open to the public. It takes only 3 hours to complete the pilgrimage and is traditionally done barefooted. 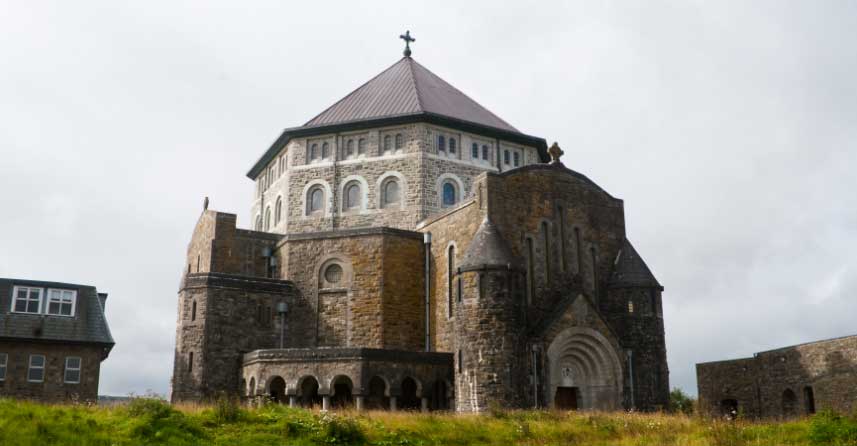 It’s one of the most ancient pilgrim routes in Ireland dating back to the 5th century. Situated in Station Island, it allows pilgrims to walk the shores of Lough Derg Lake, towards a cave and local pilgrimage site – St. Patrick’s Purgatory. Legend has it that Christ revealed the cave to St. Patrick as an entryway to the purgatory. Lough Derg route runs for 7 miles along the lake’s edge and is open all year round.

Also called St. Patrick’s Causeway, this pilgrim route bears great importance in Ireland’s history. Pagans walked this road to reach the ancient pilgrimage at Cruachan Aille, later named Croagh Patrick in honor of Ireland’s patron saint. It is quite long with nearly 19 miles of footpath starting at Ballintubber Abbey. Tóchar Phadraig makes for an easy walk and passes through low mountains. It includes stops to sacred druidic sites and the miraculousr Boheh rock which goes all the way back to 3,000 BC.

The Offaly Way is one of many pilgrim routes in Ireland with easy to moderate difficulty. It is evenly leveled on most parts, with a few rises above a flat landscape. Slí Mór is situated on an esker and offers views of the surrounding countryside. It runs from Ballycumber to Clonmacnoise for about 23.6 miles. Unfortunately, most of the route is on public roads. So instead of walking the Offaly Way, it would be safer to cycle it.

Brigid’s Way is a Celtic pilgrimage that was recently opened to the public. It takes 9 days to traverse the 70-mile route, although pilgrims have been known to walk Slí Bhride for 1 to 5 days without completing It. The route begins at St. Brigid’s Shrine in Faughart, and ends in Kildare – the saint’s monastic town. 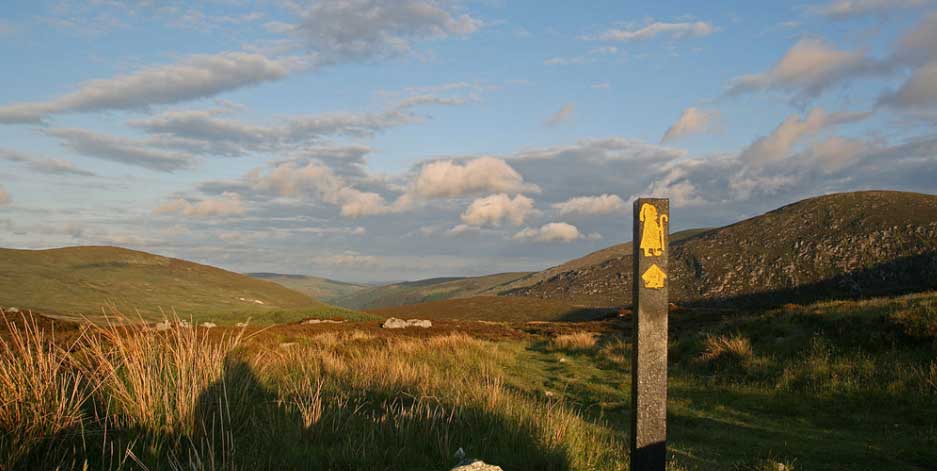 With only 19 miles of footpath, Slí Chaoimhin or St. Kevin’s Way is a fairly short route. It’s a good choice if you’re looking for an easy walk or want to have your passport stamped, as it takes no more than a day to complete. The route starts from either Hollywood and Valleymount and concludes at a 6th-century monastery in Glendalough.

The 4-mile route is one of Ireland’s shortest. It starts and ends in Kilcommon, and is based on old mass paths which circle around to a local church. During the 2-hour walk, you will pass minor roads, forested areas, and the open hills of Tipperary and Limerick. Kilcommon is best known for its spectacular views of the countryside.

The pilgrim path sets off from the medieval ruins of St. Blathmac Church in Rath. It’s a short and easy walk much like Kilcommon, but instead of the countryside, it takes you across various historic landmarks such as the Dysert Catholic Church, the holy well of Tobar Orieachta, Dysert Castle, the Hermitage of Tola, and finally, the High Cross of St. Tola. If you’re taking this route, you would be able to complete it in 2.5 hours. 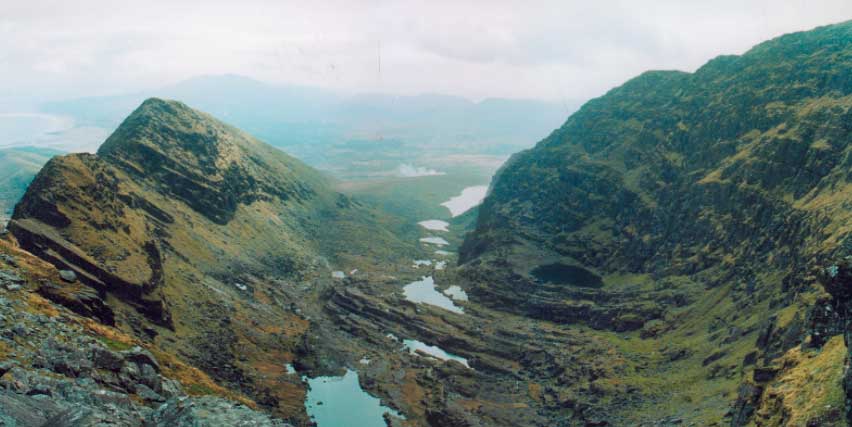 Despite its humble name, Saints Road or Cosán na Naomh boasts spectacular sceneries. It leaves from the beach at Ceann Trá and gently makes its way up Brandon Mountain. Despite being on the second highest peak in Ireland, walkers wouldn’t have a problem climbing the trail, and will certainly enjoy the seaside and hillside views. Among its attractions are the Ogham stone at Maumanorig, the Gallarus Oratory, and several medieval ruins.

The trail was once an important site for local pagans who celebrated Lughnasadh, an ancient Celtic harvest festival. Nowadays, the route has a Station of the Cross which leads to the peak of Knocknadobar Mountain, where you can get breathtaking views of neighboring islands – Skellig, Valentia, and Dolus Head. Cnoc na dTobar is nearly 5 miles long and of moderate difficulty.

As its name suggests, the route follows the footsteps of St. Finbarr in an ascent across valleys and mountains. From Gougane Bara, the trail joins Beara-Breifne Way and descends sharply into the saint’s hermitage. Pilgrims can take a shorter alternative to this two-day hike by stopping at Gougane Bara.

Spanning for about 56 miles, it is one of the longest pilgrims routes in Ireland. The route was named after St. Declan of Ardmore who Christianized the area between 350 to 450 AD. The trail begins at Cashel and ends at Ardmore, and will take you through a number of local historical landmarks.